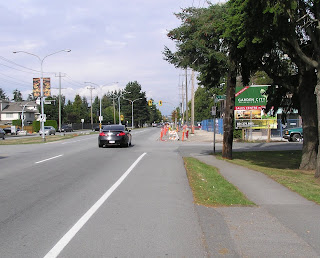 Bike lane interruptus
Right. In reality, the only way to safely and efficiently travel through suburbia is by car. Suburbs are the result of cars, could not exist without them, and those relying on alternate forms of transportation are, in a word, screwed. If you ride a bike on city roads you are at best an eccentric, at worst an annoyance -- and likely to be treated as such.
The City of Richmond, where I live (sure wasn’t my idea), pays lip service to cycling as a viable means of getting around, but in reality does little to encourage it. On a handful of the roads that are wide enough, bike lanes have been painted on, but these end without warning, thrusting the cyclist into traffic that, of course, is only looking out for other traffic.
The picture above reveals how serious this city really is about facilitating cycling. A massive condominium development is going in along Garden City Way (Yay! More cars!), and as part of the process of making the condo’s frontage truly glorious, the adjacent bike lane has been chewed up for, well, I don’t know what for. The orange pylons mark where the bike lane used to be. So now the cyclist has a choice -- take your life in your hands and try to merge into very fast traffic, or bump long the loose dirt and gravel inside the pylons. It is now late September, and this stretch of bike lane has been out of commission since June. That’s right, it was chewed up in June. The significance? As the city proudly proclaimed, “June is Bike Month!”
Nothing has to be true, or even mean anything. It only has to sound good.
Posted by Hugh Griffith at 3:18 PM

Email ThisBlogThis!Share to TwitterShare to FacebookShare to Pinterest
Labels: suburbs

Oooooh ... driving in Richmond is scary ... can't imagine cycling there!

It took me a while to build up the courage to do it. Over the years I have learned which routes to take amd which to avoid. But still, one must remain hyper-vigilant, and it helps to wear glare-cutting sunglasses that allow you to see through windshields and read the drivers' faces.