Nothing can stop them! 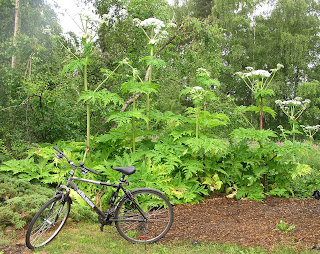 I remember as a teen liking a song by Genesis, at the time fronted by Peter Gabriel. It had the provocative title, Return of the Giant Hogweed. Little more than the title remains in my head, but, of course, I was able to find the lyrics on the web. Why would I bother trying to revive such a dim memory?
Because there really is a plant called the giant hogweed, which I didn’t know when I was enamoured of the same-named song, and I recently discovered that it lives near here, along the CPR line near Westminster Highway.
Who knew that art rockers way back then wrote songs about real eco-esoterica, about treacherous weeds that grow to 15 feet or more? As if to make clear that the song was not entirely a product of enhanced 1970s imagination, the lyrics included the plant’s Latin name, Heracleum mantegazzianum. The song says, dramatically,
“Nothing can stop them
Around every river and canal
their power is growing
Stamp them out!”
Yes, it is a wetland plant, typically growing along the edges of watercourses and in other damp places. Native to the Caucasus Mountains in southwest Asia, the giant hogweed is regarded as an invasive weed just setting foot in BC, having already become well established and problematical elsewhere in North America. It spreads rapidly, with table cloth-sized leaves that shade out native species, including those whose root systems are vital in preventing stream bank erosion.
The giant hogweed is a spectacular plant, with flower heads the size of home satellite dishes and bristly stems that can be as thick as your forearm, if you do not have a particularly thick forearm. Given this plant’s size and menacing name, I’m reminded of Audrey 2, the voracious centrepiece of Little Shop of Horrors. However, thankfully, unlike Audrey, it is not carnivorous. It is a member of the carrot family, a group of plants inextricably intertwined with human lives, both roots and foliage, for good and bad. Who else is a carrot? Well, carrots (duh), celery, parsnips, parsley, fennel, poison hemlock (Socrates’ last beverage), and cow parsnip, a native plant resembling the giant hogweed, but which grows to a paltry 4 feet.
A nasty sidebar regarding our gargantuan newcomer is that its sap is irritating and photo reactive. It intensifies the effects of UV light on the skin and can cause blistering burns that scar and leave dark patches. Giant hogweed is not to be dealt with frivolously. Gloves and long sleeves and goggles must be worn in attempts to subdue this beast.
The song informs us:
“Fashionable country gentlemen
had some cultivated wild gardens,
In which they innocently planted the Giant Hogweed
throughout the land…
Soon they escaped, spreading their seed.”
Then it gets too silly to continue citing. Nevertheless the history is correct. It was introduced to Europe and North America as a horticultural curiosity and has escaped. It has been recorded in scattered locations throughout the Lower Mainland .
After taking pictures of the towering adult plants I looked down. Around my feet, far from the parent plants, were the recently-sprouted giant hogweedlets, like a swarm of baby Audrey 2s. I felt itchy. I got on my bike and rode away.
Posted by Hugh Griffith at 11:18 AM

Great post. You missed a good quote from the song:

Can't you just see Peter Gabriel lurching around in his flower suit? You're right - that is an excellent quote and I should have included it.