Drawings of little-known lizards or parts thereof. III. Skink skulls and the dismantling of Eumeces.

Someone found RPL (i.e., this blog) by googling "lizard skull drawing." Here are two more, followed by a brief but dense justification for their production and why most skinks formerly in the genus Eumeces are now within the genus Plestiodon. I kept it brief; I could have gone on and on... 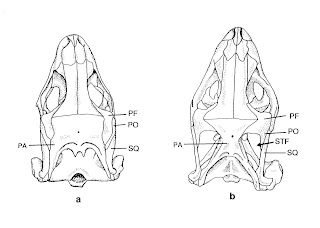 The Scincidae is a large, cosmopolitan family of lizards of several hundred species. Many are small, limb-reduced forms, as I have touched on previously. Until relatively recently not a lot was known of the phylogenetic relationships among skinks, and one large old genus, Eumeces, was the repository of most of the scincine skinks (those with a primitive palate) with a full complement of limbs and digits. This included most of the skinks in North America, Central America, Eastern Asia, plus those in North Africa and the Middle East.

This was a catch-all genus I argued, and pointed to, among other things, the very different skulls of the North American and Eastern Asia skinks (known informally as the Pariocela Section of Eumeces) compared to the other Old World Eumeces. Old world species retained the primitive conditions for postfrontal, postorbital and parietal bones, and a wide-open supratemporal fontanelle, another primitive character state. The alternate states found in all Pariocela Section species were interpreted as shared derived states, supporting monophyly (all species evolved from a single common ancestor).

In my doctoral thesis I suggested the genus be split, with the North American/East Asian clade taking the name Plestiodon. There was a subsequent suggestion of which I was a part that those species retain Eumeces, perhaps a bit of North Americam herpetological chauvinism, which was not generally accepted. The Pariocela Section was reassigned Plestiodon by H. Smith (2005), and that name then gained acceptance. In recent years, molecular studies have supported the clade, and Plestiodon is now in broad use as the name for the group. Recent history of the taxonomic changes, including citations, is given here.
Posted by Hugh Griffith at 11:41 AM

Thanks for the illustrations and history. What does the name Plestiodon mean?

I'm not sure what it means, but I bet it has something to do with teeth. I'll try to find out.

I found RPL by image googling "skink drawing," looking for a picture to embroider on a pillow. Yours was second, the first was from a site for Australian conservation.

I too am obsessed with skinks. I will have to read some of your work. I believe that the success of skinks on Earth can be summed up as "the one that got away." They figured out how to better escape from predators than their brethren and their success allowed them to experiment with body size and reproductive habits. Still, the bauplan is highly conserved across the spectrum of species.