It is a little-known fact that metal street lights were originally designed as Red-tailed Hawk perches. The lights were added as an afterthought. 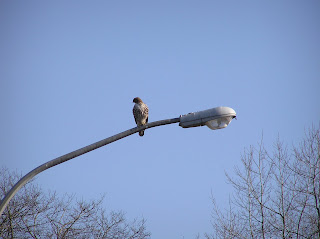 Street lights are everywhere because Red-tails are everywhere, throughout most of Canada, the US, and further south, including the Caribbean, hinted at by the Latin name, Buteo jamaicensis. 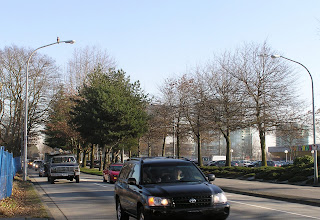 Spot the street light (hint: Red-tail). This bird is perched across from Lansdowne Mall in Richmond, in the midst of some of the densest development and heaviest traffic flow in the city. 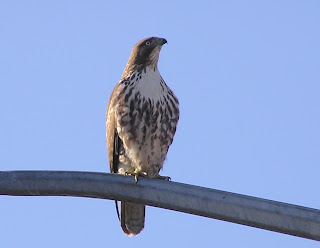 The bird let me get very close; I had to walk beneath the light on my way back to the bicycle shop. He gave me the eye, but was more concerned about the three or four crows swooping at him. 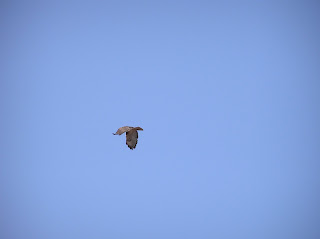 I think the previous bird was a male because a larger Red-tail was in a poplar tree in the field behind the blue metal fence (left side, second picture), being harassed by many more crows. I guessed that they were a pair, or were in the process of becoming a pair. I snapped a couple of quick shots as the female fled from the crows. 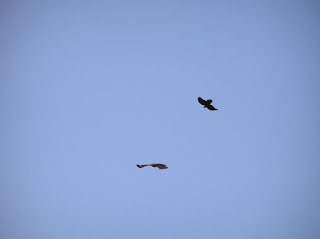 But to get back to the point, if you live in a dark, depressing place, could be you need a few more Red-tailed Hawks. Heck, they even brighten up places as dismal as concrete waste water treatment plants.

Posted by Hugh Griffith at 2:37 PM

I was a quite young when we moved to "The Valley". One rarely saw a hawk. As the years went by, the hawk population grew until now they are a dime a dozen. They truly most like the concrete world ... and lamp posts!

I just want to say... I stumbled across your blog quite by accident the other day (not searching for how to rid my yard of pests, either, I'll have you know!) and I am now completely hooked. You are a talented writer, and while I am even remotely close to being "The Z Word", your style makes learning about all manner of creatures big and small very interesting. Thanks, and keep up the great writing and photography. I'll surely keep reading!

I haven't looked into hawk population changes, but it is certainly nice to see them in healthy numbers.

Of course, very few people do see them, even when they're perched on their own street lamp. Look up!

Thanks, "Me" for making my day with your kind words. I'll try to keep finding interesting things to post about. "The Z-word" in me won't let go. It was very nice to hear from you,