It started when I decided to wash the car on Sunday. After I finished, I neglected to consider how cold it was about to get, even though I was aware of the arctic air mass headed this way.
It did get cold indeed, cold enough not only to further crumble the concrete frog birdbath, but also to crumble the terra cotta dish I placed inside the concrete frog bird bath, which was necessary because of leakage. 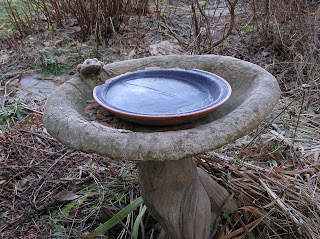 Recall that my bicycle is in need of repair, and I thought that today might be a good day to take it to the shop to have its cable replaced. But this is a working bike, and shows it. I thought it appropriate to blast some of the mud, etc., off it with the hose before taking it to the bike place, because you know how bike people are about bikes. I once saw a bike guy scold a customer for having a dirty bike.
I took the bike to the back yard, stood it on the brick patio, picked up the hose nozzle, and turned on the tap. The hose went rigid, but for a second or two nothing else happened. Then there was a cracking sound, in my hand, the back of the nozzle split, and I was sprayed with ice water. I turned off the tap and unscrewed the nozzle. It was full of ice, from Sunday's car wash. 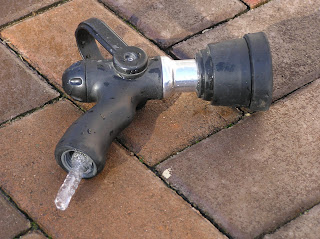 Ice-maimed nozzle. Note ice core protruding from the handle, and (click to see) seaturtle-like smile on the posterior pressure cone (my term), actually a fracture in the casing.

Things went downhill from here. There is a second nozzle, which has leakage issues of its own, but I gamely attached it to the hose anyway, turned on the tap, and stood back. It started with a dribble, but eventually was spraying like crazy, doing the hose dance. I was able to subdue it with only minor further wetting, and blasted away at the bike, one side and then the other.

I discovered that the water froze almost instantly upon hitting the patio, creating a layer of glaze. I slip-slided my way around, hosing muck off the wheel rims. Finally the bike looked clean. It also looked frozen. I left it in the sun to melt and dry.

Then I thought of my second bike, my old bike. It probably could use a wash too. I dragged it out from the garage, pumped up the tires, and hosed it down. It's been a while since I have ridden it. I thought, Why take bike number one to the shop, peddling all the way there in first gear, when I can take good old bike number two for a ride on the trail through the blueberry fields and snap pictures of the snow-covered North Shore mountains? I recalled that the gearing was a bit off on this bike too, so fetched a screwdriver and tightened and loosened the screws that change the positioning of the thing that moves the chain from side to side among the front sprockets (I have no idea how it works), and eventually the chain moved correctly. I felt a wave of self-satisfaction, which is probably why I did the next thing: I went for a test ride in the back yard, which is a small yard.

The wheels flew out to the left, and I came crashing down onto the bricks. Was I wearing a helmet? For a test ride in the back yard?

I lay there, a bit winded, my first coherent thought a hope that the neighbours over the back fence hadn't been watching. I struggled out from under the bike and assessed my injuries. Sore shoulder, elbow and hip on my gun-slinging side. My head hurt a bit, but I didn't feel concussed.

I walked to the nearest blueberry field and reached up high with my camera to get above the bushes, aiming at the mountains. It was hard to hold the camera still with a sore gun-slinging arm, so the pictures are not as crisp as I had hoped. (You really should see the North Shore mountains on one of these cold, clear winter days.) I wonder if people who work in the skyscrapers in Vancouver get anything done on days like this, or if they sit there and stare out the window. 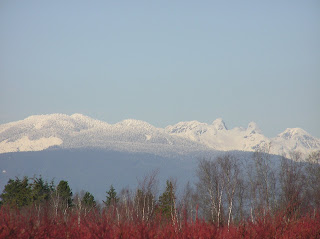 Cypress Bowl (left) and the lions. 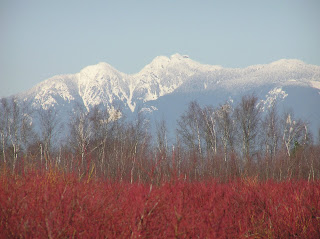 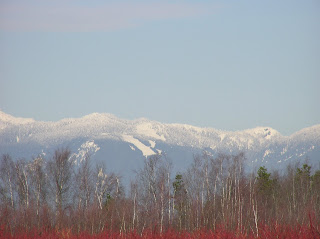 Thank you for the vitamin D. Send Advil!

Posted by Hugh Griffith at 2:45 PM

Email ThisBlogThis!Share to TwitterShare to FacebookShare to Pinterest
Labels: mountains

Too bad about your gun slinging arm! Hmmm, a comedy of errors.

One really should disconnect hoses in the winter!!!! ... or instead of a cracked/fractured casing in your hose's nozzle you might get a cracked pipe ... big ooops-y then! The Mrs. would not be happy.

Nothing like a cold crisp clear day in the valley for views! Alas, how seldom they appear.

P.S. Isn't funny how we can be reduced to meek childhood-dum ... by scolding dental hygenists ... by bike repair guys .... we do anything to avoid their chiding!

I am usually very careful about disconnecting the hose, shutting off the water and opening the taps during winter. Vitamin D deficiency must cause mental lapses.

I was very pleased today that my bike passed muster at the shop. Bike and I are both fine now.

But I was scolded by the dental hygenist this morning. Turns out you can't save up all that flossing for the last few days before your appointment.