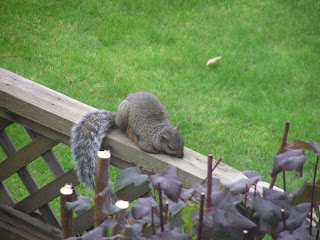 This post is not about the depressed-looking squirrel. It’s about those sawn-off broom handles next to it, which are actually the woody stems of a blue elderberry, Sambucus caerulea, which I pruned down to near-nothing some time last fall. 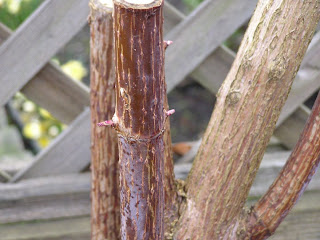 The blue elderberry, unlike yesterday’s starring plant, the black elderberry, Sambucus nigra, is native to British Columbia. It grows on dry to moist , fairly open, low elevation sites from southern Vancouver Island and the adjacent mainland south to California (Pojar & MacKinnon, 1994). The more common species here near the coast is the red elderberry, S. racemosa pubens, var. arborescens, which has already flowered and set fruit. The blue elderberry is a slow starter; in march its only signs of life were these tiny buds. (Although, granted, in a natural setting it would not have been chopped down to nubbins six months ago.) 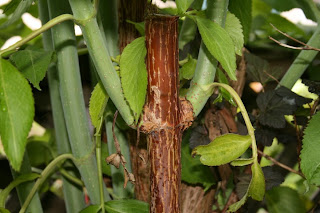 But now, as of today, big blue is making up for lost time. Look what has become of those buds. 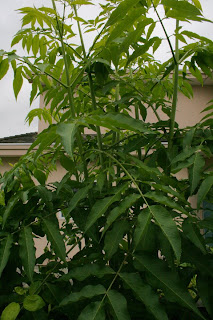 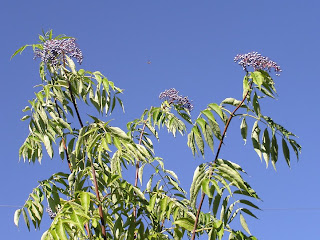 By late summer it will twice as tall, with bunches of powder blue berries swaying in the wind, and my neighbour will have lopped off several branches that dared lean over the fence. And the squirrel? Hopefully it found some happy nuts.

At seven feet tall, I can see why you chop it back.

I've considered planting elderberry, but worried they wouldn't get enough water. All the elderberry here in SW Montana is the black variety and grows by streams, with its feet practically in the water. I think of southwest BC as pretty darn wet. We only get about 20 inches of rain a year. What do you think?
--kate

I suspect you're right, Kate, it would have a hard go of it. I think your black elderberry is another race of our red elderberry, which is certainly a plant of damp places (wet forests, lake edges, etc.) It grows in such habitats here -- and here on the coast we get about 40 inches of precip a year, which increases dramatically as you move closer to the mountains.

My neighbour has an elderberry - not sure what type just the common one here in the UK and every year I loped back the branches as they swamp part of my garden and the following summer - they are back!! Maybe it is a lost cause!