Slightly over a year ago I wrote a story about a pond within a park that had just been created in an old, suburban neighbourhood. I wrote about the plants and animals that had already moved in, or were at least visiting for a while. I often write about the park, mostly because it’s only a few blocks from home, an easy and welcome distraction from the computer. It has been featured in posts about muskrats, grebes, and cormorants, among others. The message: even in the middle of a hyperactive, rampantly growing city, given a slight opportunity, nature returns, and in some combination can thrive.

But yesterday was still a surprise. We took the kids to the park, to its brand-new, state-of-the-art, extremely cool and clever playground. I wasn’t expecting to do much other than make sure they didn’t fall off things, so I didn’t take the new, improved camera. But I did stuff Mr. Hesitation, my old Olympus point-and-shoot, in a pocket, just in case. A good thing, I suppose. I at least got a record of what we saw, which shall be revealed after this reproduction of last year's story:

Any water feature attracts wildlife – put a birdbath in a yard and see what happens. Birds! Squirrels! Raccoons knocking your birdbath over! So imagine my glee a few years ago when I learned that a large pond was about to be created in an older residential area of central Richmond, in what has since become the Garden City Community Park .

The park is in a rapidly changing part of town, surrounded by some of the densest development in the city, with hi-rises to the north and tightly-packed condominiums to the south. The park, and especially the butterfly-shaped pond surrounded by forest and trails, is a welcome, necessary focal point for both humans and wildlife.

The water is brown, rather than whatever ideal colour a pond should be, but there’s no avoiding that. The water table is high; this is mostly groundwater from peaty soil. The tannins in the peat result in water the colour of breakfast tea. Pulses of water from storm drains add to the blend.

The banks grade gently to the water, and cat-tails and other aquatic plants are taking hold, especially in the smaller, shallower eastern portion. In part this was expected and planned. The eastern portion will be colonized by plants relatively quickly, transforming some of the open water to marsh. Water entering from the storm system will to some degree be filtered as it passes through, one of the natural and important functions of a wetland. 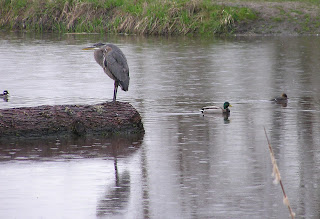 Recently, a pair of large logs materialized in the middle of the eastern half. Instant habitat! Perched precariously on the log, intently viewing the water, was a Great Blue Heron. It appeared to be hunting. I wondered, For what?. After all, slightly more than two years ago this place was a line of overgrown back yards. Fish don’t spontaneously appear from a hole in the ground.
Mallards were swimming about, no surprise. At this time of year any ditch larger than a bathtub will have its requisite pair of the commonest of the dabbling species. But, intriguingly, there were also diving ducks — Buffleheads and Hooded Mergansers. These two small ducks dive for small fish and invertebrates, and the ones here were diving. Were they catching fish? Really?
They weren’t the only ones seeking a healthy protein snack. There was a man near the Garden City intake standing hopefully with a fishing rod. This is just a scrape in the dirt, there is no possible way there are fish in here, I thought of explaining...but he seemed happy. Fish on, friend.
I learned later that in fact there are fish in there, large enough for a Bufflehead or Hooded Merganser, and perhaps a heron, but nothing pan-sized. The pond has been colonized by sticklebacks, fish about the length of a standard paper clip. Most local ditches contain sticklebacks, and they seem to have found there way to this new, expansive habitat via the storm system. The pond must then also be home to significant numbers of aquatic insects and other invertebrates, which make up the bulk of a stickleback’s diet.
Turtles have been spotted, no doubt abandoned red-eared sliders, unwanted pets, which inevitably and ill-advisably end up in any permanent urban pond or lake. An ecosystem is developing, and will likely be dynamic, at least for a while — as nature, ever patient and relentless, does its thing, and we, ever impetuous and confounding, do ours.
To the man fishing near the Garden City intake: Best of luck. Who knows what you will catch if you stand there long enough. What next will find their way here? If you dig it, they will come.

And so what came next? Well, a week ago I met a woman at the park. She saw my binoculars and asked if I knew about birds. She told me she had seen a large hawk flying back and forth above the pond and described it as grey and white. I described a male Northern Harrier, because they nest in an area a mile away, and I suggested it might be hunting in the cat-tails. She couldn’t be sure of seeing the white-rump patch or the distinctive harrier wing positioning, and was clear that the hawk had been looking in the water, not the cat-tails. She said it had hovered at mid-pond, looking down. I should have guessed -- we aren’t that far from the river, but I know there is nothing in that water for an osprey to eat, no fish larger than a guppy, so that bird didn’t even cross my mind. An osprey? At a muddy back-yard pond?
Yup. And it was making a habit of it. I dug Mr. H. from my pocket just in time for a couple of snaps. Oh, that hesitation…. 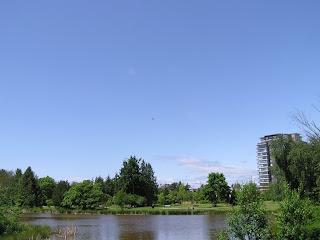 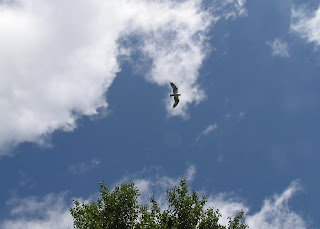 So that’s what came next. A large, piscivorous raptor. Best of luck to you too, Osprey.
Posted by Hugh Griffith at 10:26 AM

That's for re-posting this, what a wonderful oasis for wildlife in the middle of human development. I have a little man made pond that's the same way here. It's teeming with life, and it's situated in the center of about 5 huge apartment buildings.

I think we'll be wandering up Garden City way soon.

If water is brown from tannins that is OK--better than the alternative. There are several office parks and mini-golf courses in my area that put this horrible dye in the water so their ponds and fountains are the color of windshield wiper fluid. Not nearly so many osprey there :)