The interpreter had just finished four physically and emotionally exhausting seashore programs, during which he had led large groups of hyperactive elementary school students out into the intertidal zone and watched them tread on living things. He was in the seaside park, up the inlet from the city, where there is an arm of deep water that turns north toward the mountains. He was walking to the parking lot, to Old Girl, his ancient, rusted car, and was about to pray that she would start when a man stepped in front of him, a bow-legged, grandly moustached greyhair--a rich man--accompanied by a dye-haired woman, slim and bespangled and unnatural.

“Tell me,” said the grand moustache, “does the road leading to this park also go north around the arm so we could go that way to get to the other side?”

The interpreter quickly scanned the parking lot, the vehicles other than Old Girl, and spied a pristine yellow Land Rover with a brush guard and roof lights. That had to be the one. He answered the grand moustache. “I don’t know. Sorry.” This should have been the end of things.

“I don’t,” said the interpreter. He knew how to get to the park from the south, and how to go back south from the park. He had no idea what, if any, roads extended north from the park, or if there was a road that circled the northern arm of the inlet to the other side. It was something he had no need of knowing given his job and where he lived, which was south of this place. He said, “You could go back into town and pick up a map at a gas station.” He added an afterthought. “Or you could check the GPS in your car?”

The grand moustache mock-gasped. “You can’t supply me with a simple piece of information?” The slim, dyed, bespangled and unnatural woman was smirking.

The interpreter said, “I don’t know where the road goes. Sorry.” He attempted to step around these ugly people.

The grand moustache had not received satisfaction, and stepped to block his way. He again patted the interpreter’s shoulder patch, this time with force. A slap. “You,” he said. “You owe me an answer.”

The interpreter stopped and faced the grand moustache. “I answered you, now excuse me, I have to go.”

The grand moustache said, “What use are you? My taxes pay your salary, and you are of no use to me whatsoever. Why am I paying taxes for the likes of you?” The slim, dyed, bespangled and unnatural woman was smirking so broadly the top half of her head was in danger of splitting off.

The interpreter narrowed his eyes and said, “Your taxes do not pay my salary. I have never received a penny from you, nor would I ever want to.” He strode away briskly, through the parking lot, up into the forest, and pressed his back against a Douglas fir, letting the ridges in its thick bark press deep on either side of his spine. He waited until the yellow Land Rover flashed by below, out of the park, on its way to a road that may or may not have existed. "And don't come back," he said.

The interpreter returned to Old Girl, said his prayer, and turned the key. He turned the key again. He turned it a third time. He draped his arms over the steering wheel, a place to rest his head. “I need a new prayer,” he said. 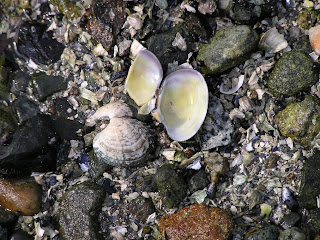 Posted by Hugh Griffith at 7:43 AM

Email ThisBlogThis!Share to TwitterShare to FacebookShare to Pinterest
Labels: minor disasters and setbacks, the interpreter

I enjoy your stories. :) And that's a great photo of the sky in the mud.

Heh, I just love these tales. I think that couple took the road east and ended up in yet another park where they gave the ranger there the same kind of grief for the same reason...she sighed and tried not to let it annoy her.

Swampy, yes, the "I pay your salary..." crap gets tired pretty fast -- as if you too don't pay taxes that support their lives. Be warned, abusive park visitors, as soon as you are gone we mock the bejeezuz out of you.

Swampy, my dear, you're much too kind to these twits. *I* think they headed north, got into a heated argument, which caused Grand Moustache to veer off the [then] steep road and the two of them to land, injured and hanging upside down in their yellow Rover in a ditch until they die. They are found months later by a deranged loner, who counts himself lucky as he relieves the dye-haired corpse of her flashy jewelry. They are soon worm food, thank gawd.

Thanks for the stories! I just found these and needed a laugh! Yes I am an interpreter and have dealt with difficult/crazy people too, so this is great!