What is the Plan for Lugworms? 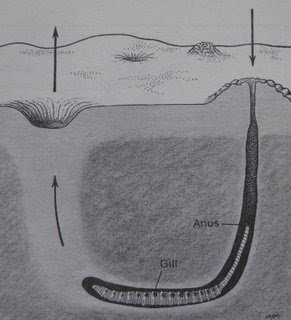 The interpreter was half a kilometre from shore in water halfway up his gumboots in the pouring rain. The family had fled, splashed back to the beach, for which he was grateful.

It had been a low tide mud walk, a free, public program. The interpreter would lead anyone who showed up out onto the mudflats and through the swaths of shallow water that dissected them, revealing the amazing living world of marine mud. These programs could be fun, or trying, depending on who showed up.

It was an unseasonably cool day with a biting off-shore wind and intermittent rain. There was a good chance this would be a no-show. The interpreter loved no-shows. Money for nothing.

But, as usual, no such luck. He winced as the classic family unit approached. Mom, Dad, Sister, Brother.

They were tall, pale-skinned people. The father had deep-set eyes and a sonorous voice that the interpreter attributed to his nose, which had the arching lines of a diving whale. “We are here for the low tide mud walk,” he droned. The son was about nine, the daughter seven.

The program had not gone well even before the cloudburst. The family wouldn’t believe him that the shed exoskeleton of a crab was not a living thing, and the daughter screamed and hid behind her mother. She continued screaming until the interpreter tossed it into a pool, where it sank. After that, the interpreter showed the family several cryptically patterned baby flounders, which none of them could see, even when the interpreter reached into the water and touched the fish, causing them to explode from the bottom and dart away. Then, on a pan of sand, next to a small tidepool, the interpreter crouched down to draw the family’s attention to a mud snail shell that housed a tiny hermit crab. You could tell by its scratchy tracks that it wasn’t just another snail. The son said, “Hey, you got the same phone as me,” and yanked the interpreter’s cell phone from the mesh side-pocket of his backpack. The phone snagged on the elasticized lip and vaulted into the pool with an almost soundless splash.

The interpreter lunged, grabbed the phone, opened it, and looked at the screen, which was blank. He shook it, wiped it on his shirt and tried to turn it on, but got nothing. “My phone is wrecked,” he said to the son.

The mother got defensive. “You can dry it out, in an oven. Set it on bake for half an hour. This happened to my neighbour. Her toddler dropped her phone into the toilet.”

“Was it a saltwater toilet?” asked the interpreter.

“No. Why should that matter?” asked the mother.

“Don’t worry, the government pays for these phones,” said the father to the son. “We pay for them with our taxes.”

“Actually, no, this was my personal phone,” said the interpreter.

After an uncomfortable silence, during which the interpreter opened and closed his phone, trying unsuccessfully to will it back to life, the mother said, “It will dry out and be fine. Put it in the oven at about 350 for 30 minutes, you’ll see.”

The interpreter looked up at the western sky. “Heavier rain is coming. Perhaps we shouldn’t go very much farther.” He didn’t want to be with these people at all, and hoped they would agree to a curtailment of the program.

“The advertisement said rain or shine,” said the father. “We’re not afraid of a little liquid sunshine, are we?” He jiggled his son’s shoulder.

They followed the interpreter across the mud, out into the bay, a lot farther. It was as if he was trying to escape them, which he was. They caught up to him on a muddy stretch dotted with little Dairy Queen curlicues of mud. Their persistence made him sigh, and stop.

“What are these things?” asked the mother, about the curlicues.

“Lugworm casts,” said the interpreter. “What lugworms cast up after they suck in mud, which is how they feed. They live in U-shaped burrows and suck everything in at one end and poop these things out at the other.” He gestured at the acres of lugworm casts that surrounded them. Once you saw one, you found yourself in a world of them.

“Mostly it’s just mud. They pass it through their guts and draw out the nutrients.”

“They’re called lugworms?” asked the father. “What do they look like?”

The interpreter dropped to his knees and with his hands dug deep into the mud, throwing scoops of muck left and right, scaring the family back. He held it up, a yellow-brown, segmented, eyeless, limbless thing the length of a toothbrush, fatter at one end, with paired, spiky, red gills along the fatter part, which ended in a ragged, spongy mouth. “This,” he stood up, “is a lugworm. You are standing on the kingdom of the lugworm.”

“Not to another lugworm,” said the interpreter. He held it out in turn to the son, the daughter, the mother, the father. None would take it, even touch it, so the interpreter said, “Fine,” and placed it back into the murky crater he had made. He rinsed his hands.

“What’s God’s plan for lugworms?” the daughter asked the father.

“Ask him,” said the father. He meant the interpreter.

“What’s God’s plan for lugworms?” the daughter asked the interpreter, who was experiencing a sense of hopelessness, which was not a novelty.

The father came up with more neutral phrasing, “What is the purpose of lugworms?”

“The purpose of lugworms?”

“Why would God create such,” the mother swirled her hand around at the mud, “things?”

“I don’t know,” said the interpreter.

“You‘ve never wondered about this?” The father stared down his humpback nose.

The interpreter had never wondered about this. He had given up on Sunday School in Grade 2. But he was a professional, so sought a middle ground, something edging toward their world view. He asked, “You mean, what roles do they play in mudflat ecology?”

They gaped at him.

“Well, they’re consumers. They draw plankton and small interstitial fauna down into the muck, along with a lot of silt, and then they deposit the silt back on the surface, releasing more broken-down nutrients for surface-feeding microbes and plants to access. And they’re a protein source for wading birds, crabs, fish, and other predators. They’re sort of like the earthworms of the intertidal mud.”

“Earthworms are disgusting,” said the daughter.

The mother asked, “Why would they be created so, ugly? And with all the spools of excretions, so exposed, where we can see them?” She looked as though she wanted to climb onto a table.

Then came a curtain of rain, racing at them. The sky had also had enough.

As he plodded back to shore the interpreter opened his phone and held it high into the cleansing rain, daring lightning to strike. When he reached the beach he opened his pack and tossed the phone inside. Amazingly, it rang. He fished it out. “Hello,” he said.

There was only static.

“Hellooooo,” he said, to more static. He asked, “If this is God, what is your plan for lugworms?”

“It’s just me,” said Stacey, who was another interpreter. “I have no plan for lugworms.”

Then the phone went dead.

Posted by Hugh Griffith at 8:47 PM

What a great story and scary family.

I seriously need to stop spraying mouthfuls of coffee over my monitor.