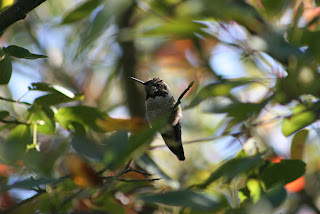 I was buzzed by this juvenile male Anna's Hummingbird in Paulik Park. He then sat on a twig for a while, now and then bursting into his scritchy song. 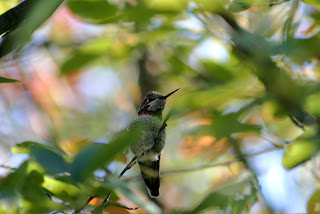 Anna's Hummingbirds overwinter here, in increasing numbers as gardens flourish, bird-watchers provide (and maintain) nectar feeders, and winters become warmer. This is a relatively recent phenomenon. I saw these birds often when I lived in California, the centre of their breeding range. The ones we see through the fall and winter here are post-breeding dispersers (probably; no one really knows what they're up to). There are very few records of Anna's Hummingbirds breeding in the province. Our common species is the migrant Rufous Hummingbird, which is here from March to late July. 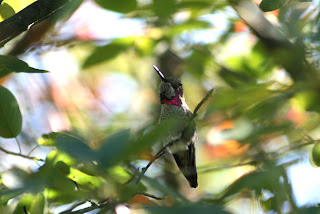 It was quite windy and the bird was bouncing around. I took about 60 pictures, hand-held, standing in a patch of Himalayan blackberry that attacked me every time I shifted. And then, unbeknownst to me, a Yellow-jacket landed on the lens and stung me when I reached to focus. I tried to swat it and the blackberries got me again. Double-teamed by nature's nasties.

But I like these three best pictures, including the framing effect of the swirling leaves.

Posted by Hugh Griffith at 9:49 AM

Those are good pics!

I've given up on my idea that the only good bird photo is a perfect one; clear, with no intervening branches, with no fuzzy bits where the dang bird decided to fluff out or turn away just at the wrong instant, with no lighting issues. They don't usually happen without thousands of dollars of equipment and time to spare.

Then again, that may be my excuse for posting "bird blob" photos.

The yellow-jacket sting was a bit too much! Insult to injury.