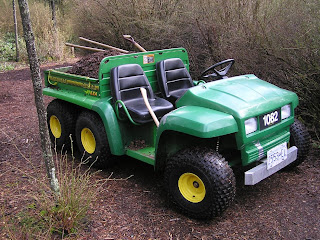 The interpreter had arranged to work three days a week for Park Operations. The work was relatively easy and almost entirely outdoors. He drove a small, open-sided vehicle called a Gator, which had six wheels and a box on the back, and hauled things from place to place. Sometimes it was gravel. Often it was bark mulch for the equestrian trails. Mindless work, mostly, but it paid better than interpretation, almost twice as much.

One afternoon a week he was in charge of diversion clients, young adults who had recently been found guilty of petty crimes and sentenced to hours of community service. The interpreter didn’t like working with the diversion clients, mostly because of the unpredictability of how the day would go.

Today there were two, Jason and Jordan, who seemed already to know each other. “J-names,” mumbled the interpreter. Every interpreter knew that J-names meant trouble. Jason and Jordan were about 18 years old, tall and skinny. They wore their ball caps backwards.

The Gator was a two-seater, meaning that someone would have to ride in the box. Both Js chose to do so despite the stickers warning instant death or maiming. “Hang on,” said the interpreter as the two-stroke engine sputtered to life. They bounced off at about twelve miles an hour.

Today’s task was to cut back and haul away Himalayan blackberry, which was threatening to capture and consume the horses. The interpreter handed the youths long-handled loppers and gloves and showed them the correct technique, which was to cut as low to the ground as possible and arrange the canes in straight bundles for easy pick-up. He worked with them for a while until they had cut enough for a full load. They helped him fill the Gator and he drove off, leaving them to continue cutting. This was the test of how serious they were about fulfilling their debts to society. When he returned would there be another load ready to go, or almost nothing new, save the tell-tale tang of hastily extinguished joints?

It was sort of a combination. When he came upon them they were fighting next to a respectable heap of cut blackberry. He shut off the motor and watched as they pounded and kicked each other, a strange violent dance punctuated by bruising impacts. Had the Gator a horn he would have leaned on it, but it did not. So he yelled, “Hey!”

The interpreter stepped from the Gator. “What was that all about?”

They looked at him blankly.

“What are you fighting about?”

“Oh that,” said Jordan. “He means the kicking and stuff.”

“Oh,” said Jason. “No, that isn’t fighting, truly. We just do that when we’re bored. You were taking kind of a long time.”

A few minutes later, as they were loading the cut canes into the Gator, Jason asked, “Do you ever come across grow-ops in this park?”

“Occasionally,” said the interpreter. “Occasionally we come across a few plants here and there.”

“If you come across nice ripe flower heads, could you save a few for me?”

The interpreter stopped what he was doing, which was stomping down on the mass of blackberry in the box. He asked Jason, “What were you convicted of doing?”

“Possession of a controlled substance.”

“And so now you want to possess more.”

“Yeah, but not get caught with it,” Jason replied.

“Well, I’ll let you know,” said the interpreter. He resumed stomping on the pile.

Jordan asked, “So like, do you do this every day, working with every loser in town, is it your regular job?”

“No, said the interpreter. “I only do this one day a week. Most of the time I’m an interpreter.”

“So that means you speak other languages?” asked Jason.

“Oh sure,” said the interpreter. “Several.”

“Can you speak Korean?” asked Jordan.

“Like you ever would.” Jason was laughing. They started punching each other again and the interpreter yelled at them to knock it off.

After they dumped a final load at the works yard, the interpreter signed the boys out and said see ya later.

But as they were walking away, the interpreter called Jordan’s name. Jason was several paces ahead on the way to the bus stop. The interpreter walked up to Jordan and said, “About Kyung. Just try to be nice around her. Be cheerful and courteous, dress nicer than you otherwise would at home, and wait for her English to come around.”

“I suppose that’s decent advice,” said Jordan. “It’s better advice than my dad gave me. He told me if I went near her he would beat the crap out of me.”

“I don’t think that qualifies as advice,” said the interpreter. “Good luck.”

Jordan gave a salute and jogged away to catch up with Jason. The interpreter would have to ride the bus too, but would wait for the next one. He walked slowly along the road, identifying birds by call.

Posted by Hugh Griffith at 5:32 PM

Email ThisBlogThis!Share to TwitterShare to FacebookShare to Pinterest
Labels: jason and jordan, the interpreter

I love the interpreter stories!
ted

Nice story. It would be interesting to know what was really going on in their lives to lead them astray.

Thanks, Ted. Sometimes I wish I had kept a better journal of those experiences.

Cedrorum, Most of those guys were young and bored, maybe got drunk one night and got into trouble. Most of them worked hard on their hours. Some even came back after they were done as volunteers.

Another great interpreter tale.
My master gardener group uses county inmates as workers at our outdoor education center. They always do a great job, but there is an armed sherrif with them. I suppose that is motivation enough not to cause trouble.