As mentioned prior to yesterday's Gloom Report, we paid a trip to the Reifel Migratory Bird Sanctuary on Sunday, and saw many of the usuals. Yes, the Black-crowned Night-Herons were in their usual spots just inside the gate. I'm beginning to wonder if they are mechanical. They move, but not much. 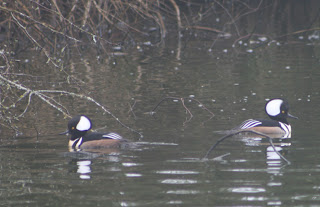 Hooded Mergansers were displaying in the overgrown sloughs. 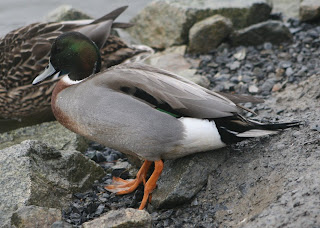 Among the dabblers was a Mallard X Northern Pintail hybrid, possibly (probably?) the same bird as seen last year. 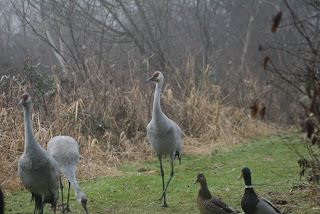 We went around a bend along one of the inner trails, and met a trio of Sandhill Cranes. Sandhills are often there, at Reifel, but I usually see them out on the dyke trail.
"What do they eat?" my son asked. He was carrying one of the little paper bags of grain that are sold at the entrance.
"Um, fish, frogs, insects..." I said, backing up, trying to keep the lead one in focus.
"So they're carnivores."
"Um, I think they eat plant material too. Get back, they're getting too close."
"So they're omnivores." He's into categorizing. And then one leaned forward and jabbed the little paper bag. Grain spilled out and the sandhills moved in, scattering the mallards. 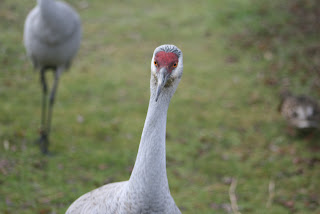 Relentless granivore.
"They eat seeds, too!" said son.
"Back up," I said.
And still they came, their orange eyes aflame. "You better dump the grain," I said.
Son poured out the remaining grain, which the cranes rapidly attacked. We bade them farewell. 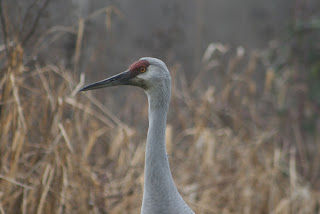 So long, and thanks for all the seeds.

Posted by Hugh Griffith at 1:48 PM

Had I seen the "relentless granivore" advancing on me I, too, would have dumped the grain. That's one serious looking birdie.

How old is your son? Those cranes could easily have been bigger than him!! How fortunate you are to be able to visit such a place and expose your son at such a young age. No Sandhill Cranes in the Northeast!

They eat people, too. Well, parts of people, anyhow.

Laurie got bitten, trying to sneak past one that was challenging our right to the path. The bird won.

It's a good thing your kid had a bag of grain.

Has anyone ever stayed late enough to see the Night Herons becoming active? (Although I have seen them active in daytime in Taiwan before).

Didn't saw the cranes up close the last time I was there, but they do look like ferocious beasts that one does not want to mess with. Just look at that bill!

Good thing that everybody is still safe and has their fingers and eyeballs still intact.

While we may luck out in the weather you sure seem to luck out with critter encounters. When we come across Sandhill Cranes up here (only in summer), there is NO getting close to them ... they are up and gone if one even looks their way!

Its Time to Live said...

Sounds like a Memory to me... a good one.

Swampy, yes, those birds mean business.
KaHolly, he's 8, and has been meeting the cranes since he was 5 or so, and hasn't been bitten yet, so doesn't really know what he's dealing with.
Weeta, I also have been bit. Always have a bag of grain in crane country.
PSYL, yes, quite a bill. Disregard the warning signs at your peril.
Cis, the weather is still crummy, but having cranes steal your grain is a helpful diversion. I'm sorry your cranes are so stand-offish.
ITtL, yup, a great memory.

A close encounter of the crane kind for sure.

Love the story Hugh. We saw our first Sandhill Cranes last weekend in the Sacramento Valley. Beautiful birds and I love their calls. I actually didn't realize they could be dangerous. Couldn't get that close to them.

After reading your post, if I visit a place like this, where the birds obviously know about the grain bags, I will be more cautious. Super captures, especially the "lead" crane coming at you. Pretty darn exciting I say!