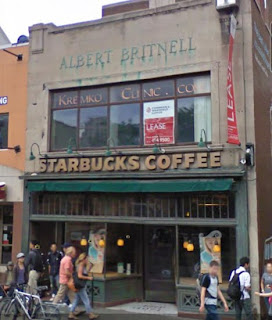 Google Street View has recently become available for large Canadian cities. I decided to walk around downtown Toronto, where I lived for several years while in graduate school. I checked out some of our old haunts, notably the pubs and bookstores we favoured back then.

Some of the pubs are gone, a few inexplicably, others lost when entire blocks were swallowed up by hi-rise condominium developments. A couple have morphed into pubs of different names and motifs. These changes are okay. There will never be shortage of pubs in Toronto. What hurts is what has happened to the bookstores, especially the old, independent ones—the ones that served Toronto through the better part of a century of growth and change. In Google Street View I amble among summer-clad, smudgy people. And then suddenly, the next image, I want to grab them, point their blurry faces at a storefront, and yell, “Look! Not long ago, and for a very long time, this was a glorious bookstore!”

In Google Street View, I am a cranky, restless ghost.
Posted by Hugh Griffith at 1:43 PM

I feel your frustration and anguish; there's nothing like a good bookstore. You can get coffee anywhere, but independent bookstores are a rarity. A pity.

Speaking as a resident of evil Charbucks' hometown, I share your pain. Also, Google streetview creeps the HELL out of me! If you see a Prius cruising past your house with a camera sticking out, feel free to make a rude gesture to be preserved for posterity!