Once upon a time in Mexico, back in the 80s. More. 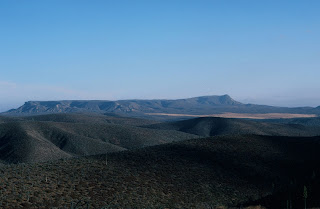 Taken from about 30 02 59.02 N 115 30 03.25 W Elev ~ 420 m.
Highway One takes you down the Pacific coast, and after a while turns inland, over the intermittently mountainous centre of the peninsula.  The land forms are worth marveling at, wondering at.  At the spot above we stopped and peeled a flattened Patch-nosed Snake (Salvadora sp.) from the road.  First specimen of the expedition. 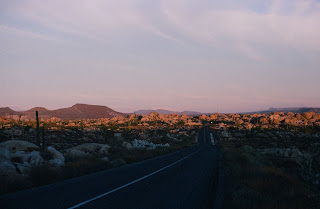 Somewhere east of 29 47 38.23 N 114 47 13.54 W Elev ~ 650 m.
Farther on, heading south and east, climbing gradually, the road cuts through the Catavina boulder fields.  The bleached boulders range from ping pong ball (not technically a boulder) to house size, and all within view of the road large enough to be tagged with graffiti, are.  I was told that the boulders are the eroded remains of a dome of igneous rock that collapsed.  Sticking up among the boulders are the extremely odd cirios, or boojums, spindly, spiny, broad-based plants that are mostly trunk.  Better pictures here.
And then the sun went down. 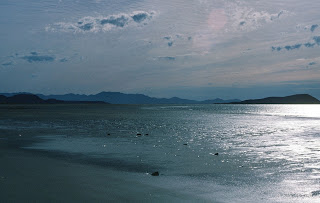 Morning light, Bahia de los Angeles. 28 57 06.83 N  113 33 29.86 W
We drove on into the night, and eventually ran out of land.  We slept on a beach at Bahia de los Angeles on the Gulf of California, the Sea of Cortez.  During the night, a strong offshore wind whipped up, filled our sleeping bags with sand and blew my jeans down the beach, into the water. 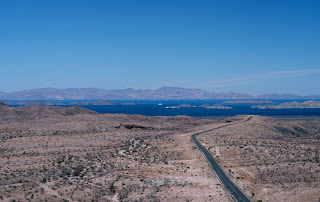 Overlooking Bahia de los Angeles, taken from 28 58 30.09 N 113 36 14.33 W Elev ~ 240m.
The next day, we drove back inland to scour arroyos for lizards.  We got some, although I forget which species and how many.  Then, for a reason unclear to me, we climbed a minor mountain, which was more or less a huge pile of rocks mined with cacti.  It was one of those deceptive mountains where you think you are almost at the top, but once you reach the crest, there's another one up higher, so up you go in hundred degree heat, your canteen empty since three crests ago, and you start to wonder what the heck you are doing in Mexico.  But at least it ended up in a nifty picture (above).
Posted by Hugh Griffith at 4:51 PM

The late Professor Frank Beach, a comparative psychologist at UC Berkeley wrote a paper titled "The snark was a boojum". I never read it, but never forgot the title. Now I know what a boojum is. Thanks.

C, I read the poem a long time ago, and remember little of it except that if you accidentally found a boojum while hunting a snark, you immediately disappeared in a whiff of nothingness. I recall that eventually there came the startled words of a snark-hunter, "It's a Boo-"

My experience in Baja was almost a Boo-

(Sylvie and Bruno, by Lewis Carroll.)

But I really meant to comment that the spatula must be an essential piece of field equipment in your line of work.

Sorry, duh! The Hunting of the Snark, by same. What was I thinking?

Man, these robot words are HARD!