Once upon a time in Mexico, back in the 80s. More still. 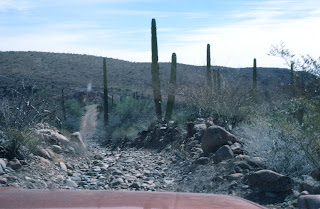 The end of a road.
Four days in, we were near Santa Rosalia, about halfway down the Baja Peninsula on the Gulf side.  Little food, almost no sleep (night was when we drove the blacktop looking for heat-seeking snakes), and mid-day temperatures in the high 90s, even on overcast days.  I was slowly learning the value of a canteen, and how much water you needed to drink when clambering up and down the sides of arroyos in such heat, but I hadn't learned enough to pay close attention when my supervisor held up the keys to the Bronco, and said, "The keys are under this rock here," and he lifted one of a thousand identically sized and coloured rocks, dropped the keys, and placed the rock back on top.  So when you need water, lift rock, open back hatch, access water tank.  Okay. 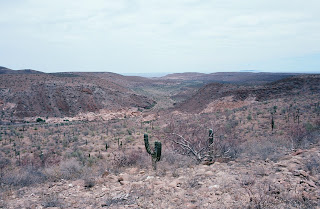 Beige and thorny.
We went our separate ways, off to make a bad day for whatever lizard crossed our paths.  It was hot, windless, absolutely silent.  I went up and down ridges, filling my collection bags, so enamoured with being a herpetologist in a place with mucho herps that I wasn't paying attention to my route, and eventually my canteen was empty.  Uh oh.  Which way, over which series of twenty-foot ridges, was the truck?
I wandered one way, and then another.  It was a world of beige mystery.  Hot, dizzy, on the verge of panic... I yelled for the others.  Nada.  I climbed the highest ridge.  Nada.  I shot a cactus, just to see what would happen.  Next to nada.  A knitting needle would make a more impressive hole.  I blundered into a cholla, 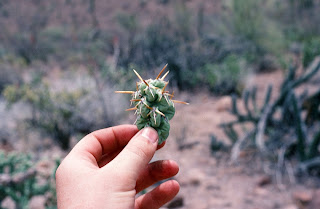 Cactal revenge.
resulting in this detachable attack-pod becoming embedded in the indentation below my right kneecap.  It took pulling as hard as I could with both hands to remove it, and it hurt like hell.
But somehow that pain cleared my head, and I was able to figure out where I was.  I got back to the truck, and of course could not find the rock.  One of the others returned as I was bent over, panting, flipping rocks in vain, wondering how long it would be before I would use one to smash a window.
He said nothing, flipped the correct rock, and we had sweet, warm, plasticky water.  Best drink ever.
Posted by Hugh Griffith at 6:17 PM

Love this series! It brings back good memories. Even the "bad" ones are good, once they're over.

I got sort of lost in a similar trackless waste on the Mexican mainland. (Out there looking for a "tree".) Every direction looked the same; endless identical cactus and stones. The car had to be just over the next rise! Except that it wasn't. Nor over the one behind me. Or the next. I ended up walking more or less in circles, calling for help.

I was lucky someone back at the car heard my hollering, or I think my bones would still be bleaching out there.

No herps, no spiders, but a cactus spine in my toe. Stupid of me to go out wearing sandals.

I took a similar trip in a small camper truck the year Highway 1 was opened all the way to La Paz. We went slowly and camped on a lot of wonderful beaches along the way. We went during the two weeks of Christmas vacation, so the weather was perfect: sunny, warm, dry. One evening trying to find a semi-private spot to do my business I squatted down. I felt something sting my foot and jumped a mile. Needless to say, I was "done." I scurried back to the light to find a chunk of Cholla cactus like yours stuck in my foot, right over the strap of my sandal. I remember the painful removal. After that I was not only careful for critters on the sandy soil, but jumping cactus as well. Thanks for the memories. - Margy