Once upon a time in Mexico, back in the 80s. Almost the end of the road. 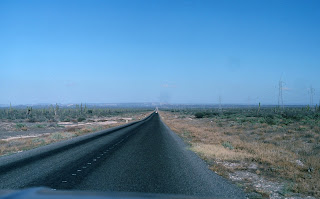 We drove south toward the cape, with much of the way monotonously like this.  At one point, the driver looked in the rear-view mirror, and swore.  His puffy, satin-blue sleeping bag, which had been nestled among the other stuff in the open-topped trailer of gear we were pulling, had disappeared.  He worked the truck around and we headed back.  I lifted my binoculars and scanned the road.  "I see it," I said.  "It's right on the centre line, about five miles back."  It was like the joke that in Saskatchewan you can watch your dog run away for three days.
We drove through La Paz at night, and camped on a narrow, gravelly beach about 35 miles beyond.  Behind the beach was a high rock wall containing a cave with a flat floor and enough room for three people to hide from the sun while processing specimens from the previous day and night.  This entailed dissection, and removal of tissues that were placed in small plastic vials and then flash-frozen in the tank of liquid Nitrogen that sloshed around behind the rear bench of the Bronco.  What remained of the specimens were injected with formalin and wrapped in formalin-soaked paper towels. These were stacked in Tupperware containers.
Once that was done, we ate a meagre breakfast (instant oatmeal with dehydrated raisins) and piled back into the truck, heading for the hills, our goal the endemic Baja Blue Rock Lizard. 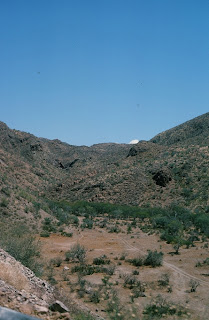 We drove winding roads, eventually ending up near the top of a canyon that had a rough track leading to a radio tower.  Here we split up to cover as much ground as possible and started searching the canyon walls for our quarry.  I can't remember if I shot anything at that place, or even shot at anything.  I was by now way beyond tired and it was hot, and I couldn't seem to focus.  I lost my footing a few times and took a few minor tumbles.  Eventually I found a way up around some cliffs, up through boulders to the top, which was what the others had done.  Now what?  Go back down, but a different way, no use repeating an unproductive route.  I cut across a gently sloping rock face, intending to search the jumble of stones on the far side.  Then I saw one.   A big, beautiful blue lizard, maybe 25 yards away, sunning on a rock.  I swung the butt of the gun up to my ear, got a bead on the lizard but couldn't hold steady.  If you miss, they're gone.  So I went down on one knee, which was a mistake.
I take time out here to explain that this trip to Baja was an expedition with the goal of collecting as much genetic material from endemic herpetofauna as possible, as part of an ongoing series of what would now be called phylogeographic studies, the biogeography of a geologically very complicated land mass read through the phylogenetic relationships among its fauna and with the fauna of other land masses.  In order to collect tissues, animals were either snatched up dead or alive from the roads at night, or shot during daylight with pellet rifles.  When I agreed to go to Mexico, I was naively unaware of the killin' part.  Thus I was perplexed when handed a gun on the first day.  To be honest, I've always liked shooting, had taken firearms training as a kid, and even won a few prizes in competitions. But I never wanted to shoot a living thing--and suddenly it was my job.  I did it okay, but sometimes lost my steely resolve and let one get away. (I passed this dilemma on to Derek, the character in my book set in Bermuda).  I believe that by the time we were on the hunt for the Baja Blue Rock Lizards, others in the group were doubting that I had what it took to be a field herpetologist.  I had a low body count.  To prove my worth, I would shoot the lizard.  And so I went down on one knee.
It wasn't until some time later that I understood that although for the most part Baja California is parched and moon-like, there is a season when hurricanes come ashore and it rains like hell.  If you look at satellite imagery (thanks, Google Earth), the land is as much shaped by water as by tectonics and orogeny.  The thin layer of dust on which I placed my denim-covered knee became lubricant atop a giant granitic cueball, the top of a waterfall waiting to return.
My knee went out from under me and I sprawled face down, the gun scooting ahead to the edge of the cliff.  And like a cue ball, the slope down which I was sliding was curved, its downward aspect increasing until I arrived at what in a hurricane would be the lip of the falls, a sheer drop.
I remember yelling.  That's what you do when you're falling.  I also remember going through anger, denial and acceptance all before I crashed onto the jumble of rocks below.  There was no time for bargaining although I did say, "Sorry," to someone who had not wanted me to go on the trip, who had made me promise I would come home in one piece.
I landed on my right side, bounced, went over another ledge and fell onto, of course, rocks, landing on the back of my neck.   The dust cleared and one of the others, having heard my yell and perhaps my impact, was shouting from a distance, "Don't move!"
I had to move.  A sharp edge was digging into my left kidney.
When they got to me, I was sitting up laughing because I was alive and not paralyzed.  They couldn't believe where I claimed to have fallen from and all walked away, leaving me sitting there.  That's when I went into shock because I had a broken elbow and what felt like a broken femur and I had lost the skin from several fingertips in trying to stop the slide. 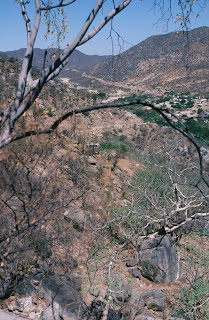 It was a few minutes after taking this picture that I fell. Almost hidden in the background is a classic VW minibus, which belonged to a herpetologist from a Californian university whom we had met and had joined our trip a few days earlier.  This was the vehicle that took me to a rustic hospital in San Jose del Cabo, an experience that was an adventure in itself, which I should write down some time. 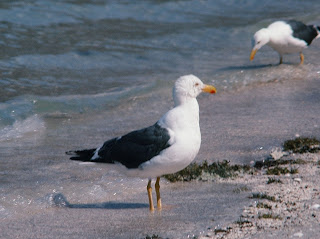 Yellow-footed Gull (tick).
My leg was not seriously damaged, a deep bone-bruise, and it was decided not to put my elbow in a cast, to prevent it from being set incorrectly.  I spent the next two days with my arm in a sling, lying on a little beach, watching gulls, frigatebirds and circling vultures as the others went off to shoot things.  I couldn't have shot anything anyway.  I couldn't raise my right arm, and besides, when the gun accompanied me off the cliff, its rear sight was knocked off.  Oops.

For a while one of my children had a paper route and I would go along, pulling the wagon with the papers. When the wagon was heavy my elbow hurt.  It tends to hurt when slightly hyperextended, ever since Baja.

When I was falling off a cliff, in all the hurried thoughts that raced through my terrified mind one certainly was not that delivering papers a long time in the future with a child whose mother I didn't yet know existed would remind me of this.
Posted by Hugh Griffith at 5:48 PM

That's a coming of age story, and you've got some battle scars to show for it -- fortunately not the enlarged liver of many snake chasers. A friend of mine urged me to go see Baja back in the mid 60s. "Before it changes, he said, "its gonna go." He and his wife would drive about "starkers" in their '53 Pontiac convertible, beach comb the same way, and not wear clothes for days on end. They rarely saw people. He was an all-round zoological collector. The killing business steered me away from systematics. When I found out I could study behavior and ecology my collecting days were over. I think the guardian spirit of blue lizards didn't want his little bro to end up in a bottle, and that day your destiny as a lizard slayer changed.

It's amazing that you didn't break your neck!

Chris, sounds like your friends led a charmed life.

The killing part turned me away from molecular systematics especially. I spent a lot of time in museums studying lizards others had killed, to add some significance to the animal's "sacrifice," a word I never liked.

Susannah, It is amazing that I walked, well, limped, away from that one.

Re: your final paragraph--yes, isn't time such an odd--almost plastic-- thing? When "this" reminds us of "that" and for a little moment we're thrust backward in time... but knowing now what we didn't know then.

Pat, yes, that's a good way of describing it. I'm sure it happens to people all the time, after they have lived long enough.