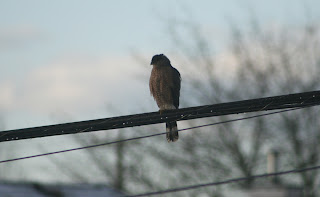 Two odd things happened on Sunday.  The morning was relatively warm and decidely sunny, and suddenly in the middle of the afternoon an angry snow cloud descended on the city to remind us that it was still winter, which was really sneaky, because as in so many places we hadn't had much wintery weather so far.
And then a small hawk landed on a wire and just sat there.  It's so tiny it has to be a Sharp-shinned Hawk, the much less often seen of the Coooper's-Sharpie Accipiteran pair. 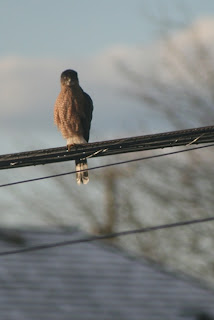 Even he's surprised to find himself there. 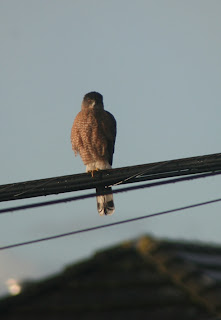 Now he's puffing himself up to look scary.  Cute.  Eventually two crows chased him away, but only after silently staring at him for a while.  They too were puzzled about tiny-hawk on a wire.
Posted by Hugh Griffith at 12:09 PM

Oh, I do love the little sharpies! I had one come year after year to plunder the little birdies at my feeders, but I loved it anyway...

Pat, I always wonder why people get upset when sharpies snatch little birds that come to their feeders. They should be proud. They have created a food chain.

I'm not sure where "winterlude" came from. It's not my word.

I read Pat's comment and laughed. I bought a small bird feeder and picked out a spot for it in a small group of Lombardy poplars. I kept putting it off, then one day we looked out the window and there was a Peregrine Falcon sitting on our trailer, looking right at the spot where I was going to hang the feeder. I'm thinking I should choose a new spot for it!