It was hot and Gavin Budnik was miserable.  He was clomping along in a white t-shirt and blazing orange safety coveralls half-unzipped and rolled down, with the sleeves knotted around his waist.  His footwear was gumboots.  He had a backpack full of rattling plastic crap over his left shoulder and carried a pole with a cup on the end in his right hand.  He was Mosquito Boy.  He hated being called that.


Similarly dressed but in a green t-shirt, still back in the ditch, was Larissa Letham.  Mosquito Girl.  He bet no one called her that.


He was pale and somewhat moony faced, and he wore glasses, but pretty much the same could be said for her. He had been working on his wording for a week.  Her response?  She just gaped, and then said, “I think we best keep this a strictly professional relationship,” after which they split apart in embarrassed silence and went back to dipping at opposite ends of the ditch.  After a few shocked minutes he looked over at her. She was staring down into the water, shaking her head in what seemed to be unlimited disbelief.


She had looked at him as if he were insane.  Really? He was that far out of her league?  What league exactly did she think she was in?


Now it would truly be the summer job from hell.  He should have waited till the end to ask her.  It still would have hurt, but then back to school and out-of-sight, out-of-mind.   For some reason, maybe it was the sun lighting the free floating ends of her hair, the time had seemed right.  Apparently not.  All was lost.


His father had spent his college-year summers working at Crappy Tire, wearing a vest and stocking shelves and dodging customers.  He should have gone for something like that, a job where someone would say, Here, start stacking these boxes on those shelves till there’s no space left, and make sure the prices are clearly indicated, and put things back in the right places when customers move them around.  Boring, yes, but then on break you got to go out to the loading bay and play ball hockey with returned sporting equipment that was slightly, not fatally flawed.  He should have gone for that, boredom interrupted by sport.  He only applied for the mosquito job, which was a contract with the municipality, because he heard from a classmate who knew her that Larissa was doing it.


Gavin took the sample.  The scoop almost boiled with larvae, pogoing around.  He poured as much as would fit into a plastic vial that had been pre-marked with a Sharpie.  He snapped the lid closed, and stuffed the vial into a plastic tub with the others.  He left the ditch, and Larissa, behind.


Along the road he came upon a man almost as old as his father, looking relaxed in shorts and a short-sleeved shirt.  He was photographing a small green bird perched on a crooked branch.  His camera had a long lens and its shutter clicked aggressively.


He hoped the man would ignore him in his state of disarray, but he didn’t.  He lowered his camera and turned to him and said, “Sampling for mosquitoes?”


God.  He knew he was a mosquito boy.  Perhaps it was his surprise in being identified that caused him to stop.  “Uh, yeah,” he said.


The man looked past him to squint down the road at Larissa rising from the ditch like a Venus.  He could read situations.  The man knew.  Gavin had an urge to bolt.


But before he could, the man said, “Are the mosquitoes bad this year?”


Gavin said, “Ah, yup they’re bad.” He rubbed his eye. “They’re really bad.” He heard his voice quaver, and reached for an excuse.  He said, “I’ve got sun-block in my eye.”


“Yeah, it is,” said Gavin, plucking off his glasses to rub both eyes with the backs of his wrists, his mosquito pole waggling to the side.


As Gavin replaced his glasses the man said, “Well, good luck with your work.  Perhaps it will lead to an interesting career.  You never know.”


Larissa was nearing, her hollow boot sounds getting louder.


The man smiled, then turned away and raised his camera at the bird, which hadn’t moved at all, and took more pictures.


Gavin mumbled, “Have a nice day,” and hurried on.  The man obviously knew.  He resented the man for knowing.   And why was he taking the same picture a hundred times?


He got to his car, a faded grey Corolla that had belonged to his aunt and then after she died was passed around the family.  He wanted to change out of his coveralls and boots and get going before Larissa caught up.  Her car, also a Corolla but not quite as old, was parked behind. He hoped to be a speck in the distance by the time she got to it.  The zipper of his coveralls was stuck again. He fought it desperately, to no avail.  She was upon him.


“Sure.”  He frantically kicked his leg until his boot flew off.  It landed upright on the yellow line, which was impressive.


Larissa said, “The guy with the camera said you were in a bad way.  He said you needed your eyes flushed out.”


He took off his glasses.


“Yeah, they look irritated. Tilt your head back.  Scrunch down a bit.”  She was uncapping her water bottle.


He let her pour warm water over his face, half of which went down his neck.


She opened her car and plucked a handful of tissues from a box on the floor.  She handed them to him and said, “We should go for sushi.  I’ll drive.”


He wondered what was happening.  Maybe not all was lost. 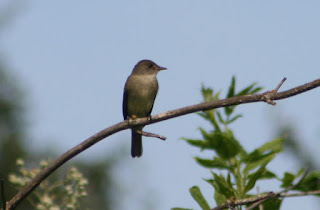 Y'know, this story makes me think of a book of short stories I picked up, titled "Birds of a Lesser Paradise," by Megan Mayhew Bergman. Some of the stories I really liked, some not so much, but the thing is that each had to do with the natural world--like this one you've written. Wonder how we get you published like Megan Mayhew Bergman?

Hi Pat, Thanks for the comment and the information about MMB. I read a bit of what Amazon allows and I see what you mean. I wonder too. I remain about the laziest (most chicken-hearted?) self-promoter I know. How is your Greenpeace-based book coming along?