Lesser Snow Geese in Richmond: back. 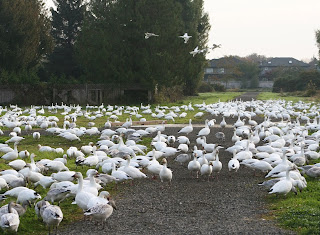 This is the first big (1,000+ birds flock) I've seen in Richmond this year, at the Terra Nova Rural Park.  It was heartening to see and hear them--they are as noisy as they are striking.  While grazing they maintain a murmuring din, like a revving engine.

An eagle glides past and they over-react, which is jaw-droppingly fun. 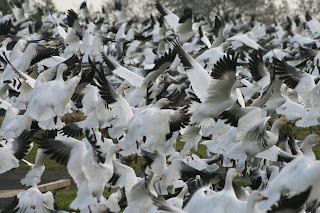 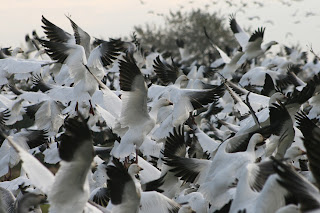 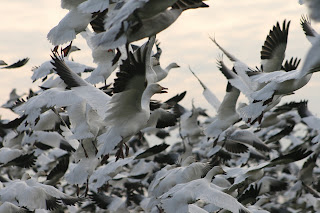 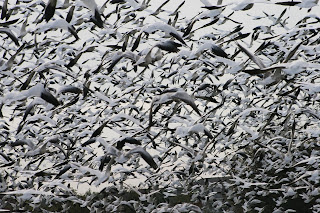 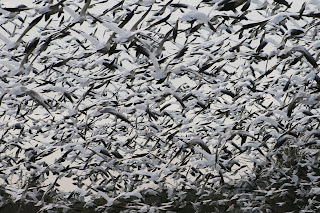 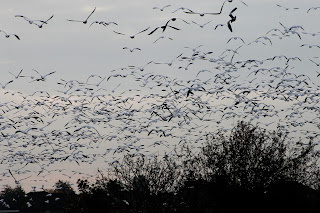 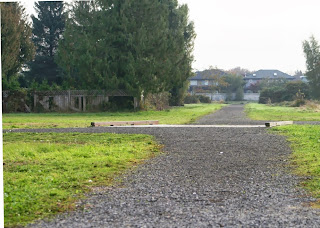 They circle, but land elsewhere.  There's a city full of lawns, and they're just getting started.


Click on the "snow geese" label below for many more posts about these birds and their relationship with this island city.

Posted by Hugh Griffith at 6:05 PM

Hi Dave, It will be interesting to see how they spread out this winter. Their overwintering here in large numbers is a relatively recent phenomenon, but so far there's no clear pattern from year to year. Last year they were relatively scarce. The previous year they did a lot of damage to about half of this city's schoolyards. There's a lot to study in these birds. Plus they're spectacular.

I love to watch them panic. But it always seems impossible; how can they fly without crashing in that wild crowd?

I saw them today overhead for the first time this season. I'm still torn on the proper response to give the dog owner who will inevitably "unleash the hounds" on the flock.

Susannah, I'm pretty sure they crash into each other. I've had one crash into me as I was slowly riding my back through a flock.

Tim, My impression is there's generally no way to win that one. I've never seen a dog catch a goose, so hopefully they're not much more than a temporary irritant.

omg. Those shots are SO ARTSY! SUPER, super nice. Frame-worthy.

SO jealous of your birdy riches. xo