The one who sporulates. 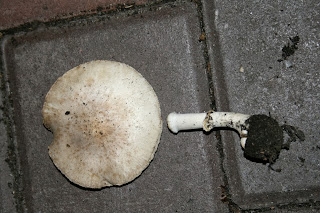 A white(ish) mushroom was discovered growing in a planter right outside the front door. The planter has been there for a decade at least, and contains a clump of maidenhair fern (Adiantum), which some years thrives and others doesn't depending on whether or not there was an early spring slug onslaught (slugslaught), and if I remember to keep watering it as summer wears on.

It has never before been joined by a mushroom.

What kind of mushroom?  I don't know.

It looked Amanita-like enough at first for that to be a starting point; it had a distinct annulus, an indentation where the gills join the stipe, and what looked like a well-formed volva (cup), but looking through books and online sites, nothing seemed to fit.  The cup isn't as well-formed as one would want (if one wanted it to be an Amanita) and other features corresponded to other genera. 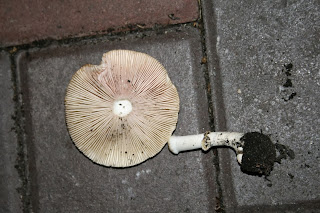 My rule with mushrooms is that if you can't identify it in ten minutes, you never will, so give up.  That wasn't always my rule.  I would take spore prints and bruise the flesh to see what colour it turned and so on.  Now I no longer do, because even when I did, I rarely succeeded in nailing it down--a lot of fuss (and mess) for nothing.   I am now happy to live with life's little mysteries.  Laziness has become wisdom.

If the reason behind attempting to identify a mushroom is to (sort of) know if it's poisonous or not, the prospective identifier is clearly someone other than me.  I have no interest whatsoever in eating a mushroom.  I don't like the things. 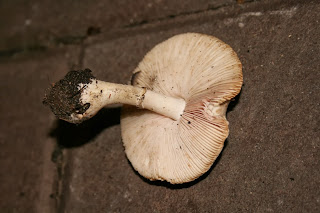 The cap broke off when I removed it from the ferns.  I stuck it back together for this photo to give a rough approximation of the original morphology.

This one had a strong raw potato smell, which didn't make it any more appealing.

Sometimes in Chinese restaurants you get what looks like a slab of roast beef smothered in gravy.  Don't be fooled.  It's a mushroom.

Email ThisBlogThis!Share to TwitterShare to FacebookShare to Pinterest
Labels: mushrooms

Or another way of putting it: Shirkiness has become comfortable.