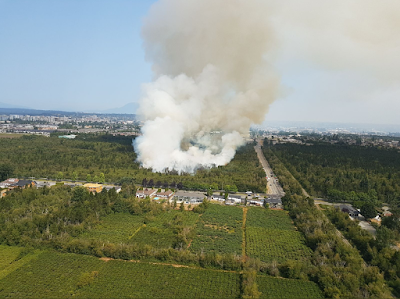 Picture from CTV helicopter, facing north. The north-south road is Shell Road.  The forest to the right of Shell Road is the Richmond Nature Park.

Lulu Island is the main island of the deltaic archipelago that comprises Richmond, British Columbia.  The city of New Westminster claims a small portion of the upstream end of the island, like the tail of a skink, where the street signs are blue instead of green, but for the most part Lulu Island is Richmond.

Near the centre are several quarter sections (half-mile squares, slightly more than 100 acres each) that represent remains of the former domed bog that once covered much of the eastern half of Lulu Island.   West to east these are the Garden City Lands (long cleared, but presently being redeveloped into an urban green space), the forested Department of National Defense Lands (DND), which contains a small military base in its northwest corner,  the Richmond Nature Park (west half). which contains the Nature House and a network of trails, and, across Highway 99, the east half of the park, which contains a single loop trail.

All this land is covered in a thick, spongy layer of sphagnum peat, which burns happily when dry, and is very hard to extinguish because the fire can spread below the surface along tree roots and resurface somewhere else.

Bogs burn.  It's part of basic bog ecology. Fire opens the cones of the shore pines and clears the scrubby understory, allowing cranberries and  slow-growing bog blueberries to flourish.  Lightning is rare here, so most Lulu Island bog fires have been anthropogenic.  As long as there have been people on this island they have been setting fires, either managing the vegetation, or for less productive reasons, or by mistake.

The fire broke out late July 26 or early July 27 in the southwest corner of the DND, very close to the Nature Park.  It is assumed someone camping in the bush is responsible, but that has not yet been officially announced.

We live about 2 Km from the fire.  I woke up at 4 AM to a strong smell of smoke and closed all the windows.  It has been hot here for the past week or more.  Few homes here have air conditioning.  Until recently it was rarely needed. Windows slammed shut all over the island.

Then the wind shifted and sent smoke to Vancouver.  Richmond calling.

But it was also sending the fire west, toward the Nature Park, where I used to work.  I went for a ride, concerned over what I would find. 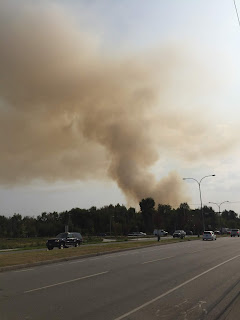 From S side of Westminster Hwy, west of No 4 Rd. (0.6 Km from fire).  The smoke column seemed relatively dainty.  Westminster Hwy and Shell Road were closed to facilitate water access and the staging of equipment.  I had to circumnavigate. A bike is good for that--you can cut through condominium walkways and back lanes. 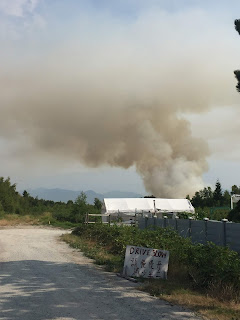 View from Granville Ave, 200 m east of No. 4 Rd (0.90 Km from fire). About 10:30AM,  the heat of the day was ramping up, and the fire no longer seemed dainty.  Trails of the Nature Park had been closed by this point.  I know there was a children's summer camp scheduled for that day.  I'm guessing they had to cancel it. 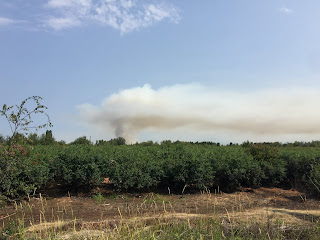 One news report said fire briefly spread to RNP but was put out.  Fortunately the winds were light. 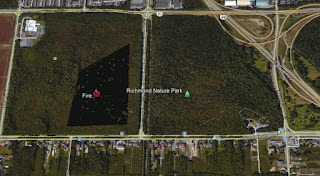 An aerial photo in the online  Richmond News today showed the burned area to be about as shown in black. 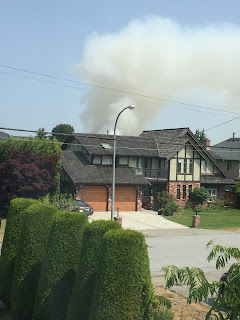 At about 3 PM, a small Cessna jet zoomed overhead, only a few hundred feet up. 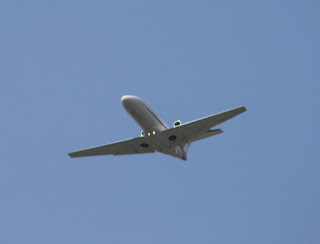 I watched from an upstairs window as it circled the fire, even seeming to pass through the column of smoke. 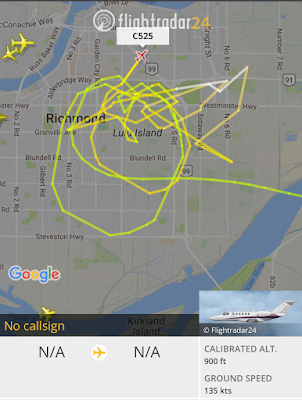 I found the plane on Fightradar24.  By the end of the day this map looked like a ball of yellow yarn.


After the Cessna had sussed out the situation, four Air Tractors arrived, small but maneuverable water bombers that use their pontoons to scoop and drop water.  The Cessna was the bird dog, pointing the way. 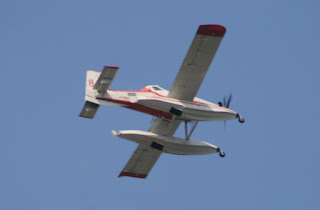 
For several hours the planes flew between the Fraser River and the fire, scooping and dumping water, a fine and effective (and noisy) ballet. 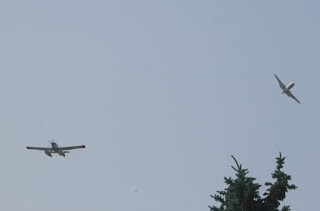 By early evening the smoke column had thinned considerably.   The fire was still active (4 days later, it still isn't completely out), but it was contained.  Since then, Richmond Firefighters and members of other agencies have been in the bog, clearing brush and digging in what has to be miserable conditions--very hot, very smoky, very dense brush.   This has been close to a record-setting heatwave, and there has been very little rain since mid-June.  Most people wouldn't want to walk through the bog in this weather, let alone do strenuous work. The weather is predicted to cool down over the next few days, perhaps even rain.  It feels wrong, in this place where at other times of the year it rains for weeks on end, to actually find yourself looking forward to the return of precipitation before the end of summer.  Okay,  rain a bit.

Then back to sun.  No one wants a grey August.

Posted by Hugh Griffith at 2:50 PM