Fall is in full swing now, in full fall.  The leaves are landing faster than they can be raked, which, beneath these first hard rains, means they will quickly become melded to the ground and unrakable.  Fortunately nothing to do with leaves is unshruggable.  Eaves clogged?  Shrug.  Catch basin blocked?  Shrug.

Next comes the bare, mean season, crying for lights and other sparkling things. But just before that cold, dark bleakness arrives, here are some recollections of early fall, those few weeks that some people, who don't seem to remember from year to year what comes next, declare is their favourite season: 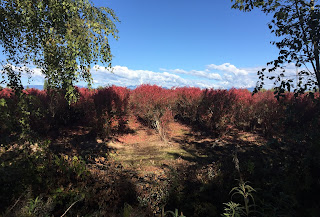 We had a long stretch of blue sky in October, which is strange. Here amid the blueberry fields, it made for pretty pictures as the leaves turned crimson and scarlet (also featured in the background image, if you are viewing this on a computer).

The October clear stretch was preceded by enough rain to prod mycelia to action.  Those within the birch rows sent up a spectacular show of Amanita this year.  Thousands of them. 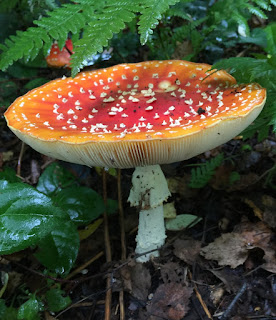 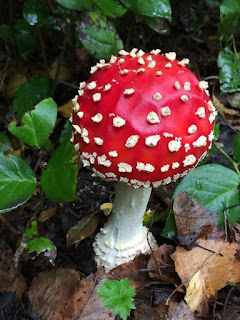 Mushrooms almost too beautiful to be real.

But one of the coolest things, and I'm not necessarily saying that it's a good thing, is the most thorough yet blanketing of the human-made watercourse pictured below with Azolla, a mosquito fern.  This red carpet is made of billions of tiny, floating ferns.  (If you scoop some out, they look a lot like tiny maidenhair ferns, half a finger-tip across.)  I think this cluster is A. cristata, a species from eastern North America, the Caribbean, and parts of Central and South America, which is quite a range.  The stuff seems to spread so readily that it's hard to know how to identify where it came from and when. 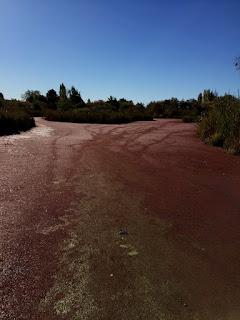 
Azolla has been in this pond, at the Terra Nova Rural Park in Richmond BC, for several years, dying back in winter and thriving again in warm, sunny weather. of which we had a lot this summer.  There has been talk of clearing it out, but I can't think of an effective way of doing that.  The ducks and grebes would probably appreciate it though.

Onward to bleakness.  (I mean the weather.)

Posted by Hugh Griffith at 4:30 PM