I took part in two Christmas bird counts this month, one along the northern edge of this island, another along the southern.  Both days it rained.  New binoculars were an early  Christmas present.  I look forward to using them not in the rain.

Here's a shed being swallowed by Himalayan blackberry.  The stuff will engulf you if you stop to tie your shoe--after it snags your shoelace. 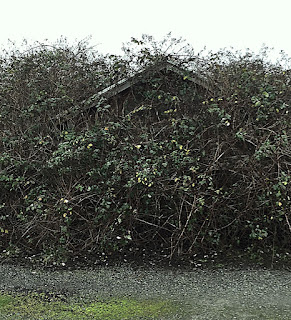 Sometimes when you're birding you meet a cheery person, usually walking a dog, because who else would be out in the rain, and, spying your binoculars--what a giveaway--the person will ask if you've seen anything interesting.  I usually reply,  "No, not yet," even if I've just seen a Townsend's Solitaire or a phalarope or some other day/month/year-bird, because if you say, "There was a (whichever fab-bird)  just back there," the most common reaction is a blank stare, because the names of most birds mean next to nothing to non-birders.

I understand that the non-birder is being sociable, trying to connect with people burdened with the need to bird.  He or she may tell you there's an eagle on a tree up the dyke. in case you might not find that one on your own.

We came across an old VW buried in empty cat food cans.  Someone has been feeding feral cats here, long-term, which can't possibly be a good idea, and also has been stocking bird-feeders, which is probably also not a good idea, especially in the presence of hungry cats, although it did provide us a chance to up our seed-eater counts.

Yes, we also wondered why the cans are not being taken away and tossed in a blue bin. 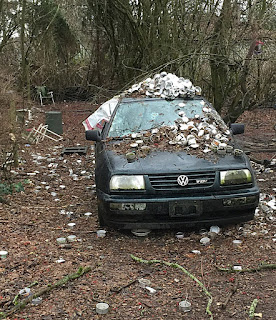 Birding peri-solstice is made harder by the low, grim light.  It is hard to pick up field-marks against a grey sky, especially with droplets on your lenses.  This is a colour photo: 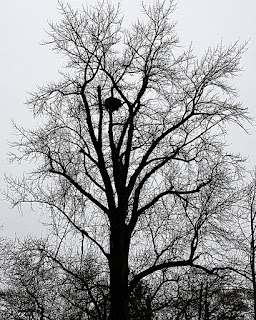 Our best bird of the day was a male American Kestrel.  It posed on a wire and shone, cinnamon and blue, even through December rain.