We had several days in a row of cold, clear nights after a fair amount of rainfall.  With the sun so very-close-to-the-solstice low, nothing had dried out or warmed up.  In open areas, where energy within exposed surfaces disperses up to the sky (I don't really get that; I believe no one does), surfaces cool and then water vapor touches the surfaces and more energy transfer happens, and...I really don't get it, but frost.  It happens when I'm asleep, so really, like Santa Clause, it's what you find the next morning that counts. 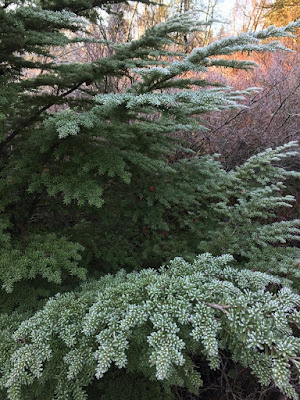 The first three pictures are from the open bog at the Richmond Nature Park.  In winter it is a damp, dark place that gets cold early and stays cold late.  Its plants turn into Christmas cards when frosted. 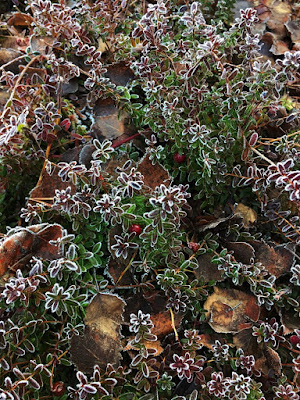 Cranberry vines.  There are always a few berries remaining for colour.
The leaf edges frost up nicely. 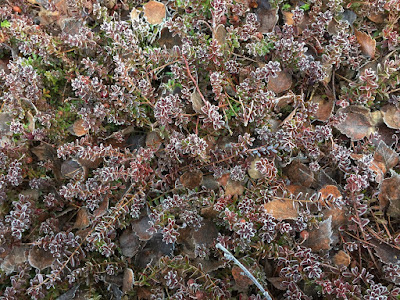 Then, as one approaches the forest, the ground-cover becomes dominated by salal, a blueberry-rhododendron (heath) family member.  It frosts well too.  In morning light it sparkles as you pass. 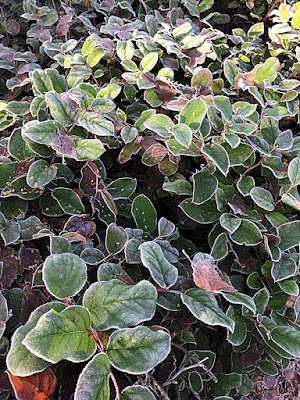 Entering the forest, which soon becomes a mix of hemlock and birch, frost disappears, because the canopy has prevented energy from radiating from the surface of plants. (Again, no one understands this, plus being asleep when it happens.) 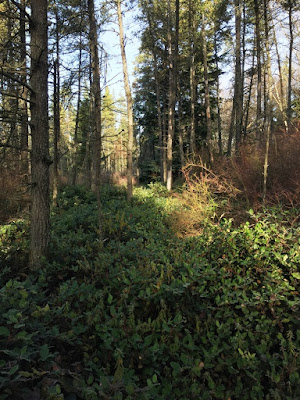 Transition zone, from bog to forest.

Then, if you're lucky, deeper within the forest, a combination of fallen birch branches, fungus, dampness, and temperature will have produced magic. 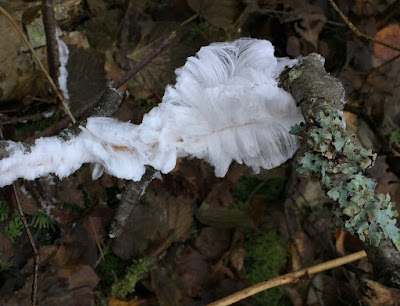 What fun stuff.  When you touch it, it melts like spun sugar, which is indeed fun, briefly, but then you look at the spoiled symmetry caused by your warm curiosity and you wish you could undo your touch.


How does hair ice happen?

Um, well...it's ice-crystal chains of diameters of 0.01 mm radiating from rotten wood that contains lignase-secreting fungi.  The hairs extend, following the rays in the wood.  It forms and lingers at temps of near freezing.  This source describes the process better, but even there I’m not sure its author, or even the author's sources, fully understand(s) what’s going on at Hair-ice Zero.  Again, this is an overnight thing, and it's a lot to bend one's brain around early in the morning.  Hair ice usually melts away by lunchtime.  By then, everyone is on to other things, especially lunch.

Here's something to take irrational pride in:  According to the above source, hair ice is a phenomenon that occurs mostly at latitudes between 45 and 55 degrees north.   We are in a sweet spot, at just over 49N, and frequently are mired at the optimal temperature range. If the stuff weren't so ephemeral and flimsy, we could have a hair ice festival. 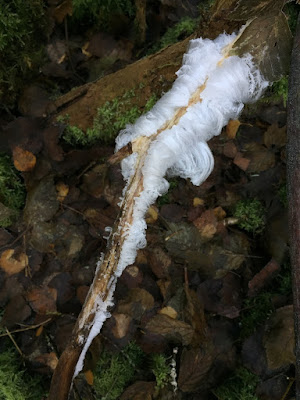 More hair ice, not quite as photogenic as the previous hair ice .

An interesting side note is that one of the first scientists to investigate the phenomenon in any detail was Alfred Wegener, known for our early understanding of continental drift.  The guy sure had range.  He probably didn't sleep much.


Unrelated P.S:   Perhaps you remember “the interpreter stories” I wrote in this blog, back in blogging’s golden age, about the trials, tribulations, and minor victories of a park interpreter.  I recently rewrote some of those stories, which can be read here.  If you have the time and inclination to read them, I would appreciate any feedback.

Fascinating! I don't think I've seen this, or if I did, knew what I was looking at.

And I'm at 50 degrees; I should be able to find some around here. Next time the temperature dips below zero, I'll go look for some.