January, there are three hours left of you. Don't let the door hit you on the backside on the way out.

Yeah, the news at every level has been a non-stop nightmare, thanks for that, but right now I'm talking about the weather. The rain, relentless and glum. This has been the rainiest January in 90 years. Congratulations.

We had a respectable two-punch snow storm in the middle of you, but the prettiness lasted barely long enough for a photo. Then back to rain. I shoveled the sidewalk, knowing there was no point. I so desperately wanted there to be a point.  A winter! 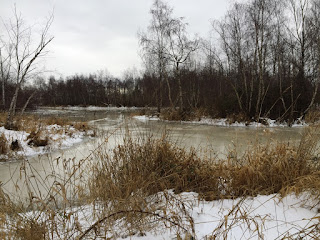 Remember the Salt Frenzy of 2017? That was a winter. When January played by the rules, froze everything up real good for a fortnight. Blue skies, mittens, toques.

But this year, your last day, I wake up to this: 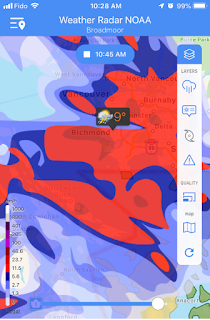 For those who can't read spilled paint, this is a radar image of here.  Red is rain, and lots of it.  It was pouring at 6 AM, and 10:28 AM, and is raining now, and will continue on into the overnight.

I found our least-damaged umbrella and ventured to the grocery store. The front yard of one house along the way was flooded. I paused to look.  The water was coming from the ground, bubbling up to create a lake. There has been so much rain that the ground can hold no more, is oozing like a pinched sponge. 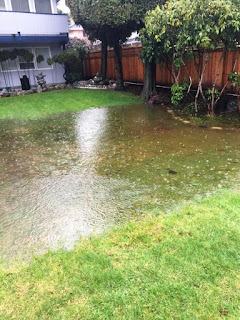 Later, there was a sucker-hole in the sky that lured me out further. I rode my bike to the trail the runs alongside the blueberry fields.  The ditches were overflowing, the fields flooded. I was chased back home when the sucker hole closed. 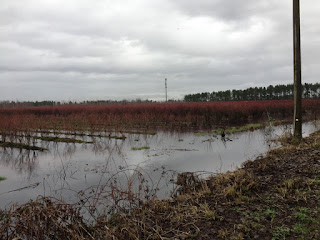 The radar says there's more to come, a stronger wave than went through already.

Yeah, I know. Given what's going on in the rest of the world, this isn't a big deal at all. It's just wet, and grey, and depressing....

and then comes February.

Posted by Hugh Griffith at 9:07 PM

Over on the island here. My driveway is a river of mud. A mudfall, really; I'm on a side hill.

Can't complain, I say, but I do. But it's better than fire, or politics, I guess.

Wet here too but a blizzard is on its way from up north. Maybe your storm hit colder air before coming to us?