By the start of our first full day in Toronto, things were closing down. This was the day we had intended to visit the Royal Ontario Museum (ROM), and the Art Gallery of Ontario (AGO) - a day too late. We learned from the local CBC television station that most Toronto attractions had closed.

Well, we could still walk.  There’s a lot to see in and around downtown, and I had chosen the hotel for its central location.  Off we went.

There seemed to be a lot of people yelling. There had been yelling all night long echoing through the Yonge Street canyon. At the northeast corner of Yonge and Dundas a young man dressed in black was yelling, but into his fist, which made it impossible to know what he was yelling about. His other fist was raised in the air. It was hard not to notice that there were a lot of ill, addicted, broken people, many slumped in doorways, amid the crowd. (The street was still pretty busy, especially for a Saturday morning. This was just before social distancing became widespread.)

We walked past Christian proselytizers on the corner where the popcorn man used to be, and entered the Eaton Centre. We went up and down the levels, heading to the far end at Queen Street, scouting out particular stores where we had been instructed to purchase items not available back home, but took a detour outside to visit the Church of the Holy Trinity. This little old church, which is tucked in behind the mall, was spared during Eaton Centre development in the 1970s. There's family history here. It'e where my paternal grandparents were married. 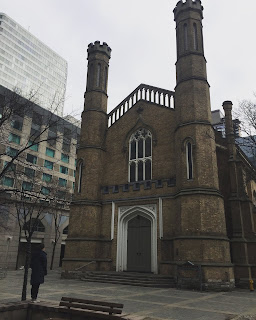 We continued on through the mall. 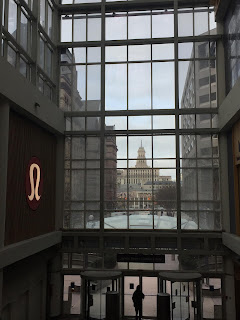 Here are adjacent Canadian icons, Lululelmon, and, in the distance, the Canada Life building, built 1929-1931, and for a long time one of Toronto's landmarks and largest buildings. 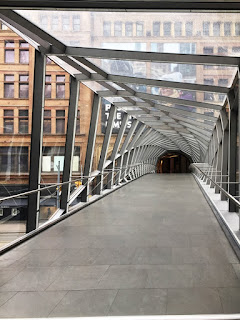 This is new, the walkway to the Hudson's Bay Store, or is it Saks now? (For old time Toronto folks, it's the old Simpsons building.) There has been a walkway since I can remember, but this is a recent upgrade. 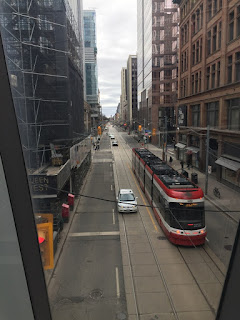 Looking east on Queen Street, one of the new, long streetcars. At night,
illuminated inside, they look like aquaria for humans.

And then to the City Halls: 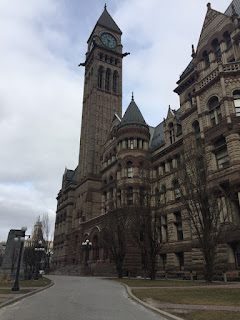 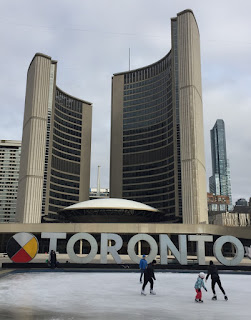 I had not seen the TORONTO sign before. I believe it was created for the Pan-Am Games a few years ago, and people liked it. The multi-coloured circle is an Indigenous symbol that was added afterward.

As you see, there were a few people skating. I can remember bumping in circles in frustrating crowds.

We heard yelling. There was a man lying on the ground on the far side of Queen Street. People were stepping around him. He didn't look like he had fallen, at least not recently.  He seemed to be sleeping, in the middle of the sidewalk, and it was not him yelling. It was the young man in black, shouting into his fist, from Yonge and Dundas.

We wandered north and west, Dundas, OCAD, through part of Chinatown, up Spadina to Kensington Market, and them through the university. 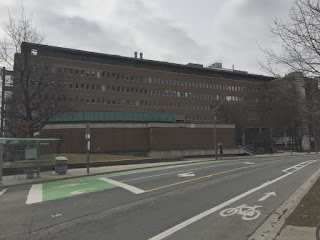 Zoology.
I can see my old office on the top floor from here.
I used to watch this corner from there. 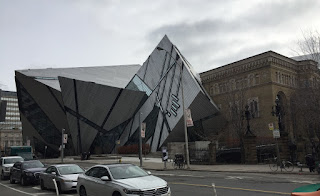 Along Bloor, past the ROM, which didn't look like this when I was last here. I had been looking forward to seeing the inside of the new bit.  We went to Yorkville for lunch. Restaurants were open and busy.

Our eat/sleep cycles were off kilter, so we took the subway south to our hotel and had a rest. Then, off to Queen Street west. 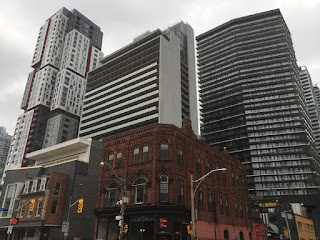 The bookstores are gone (obv.). Also, look at these things, surrounding and infiltrating the old beauties.

There's a boxy new MEC where The Pusuit of Happiness parking lot used to be (only relevant to those who watched MuchMusic in the 1980s). The Horseshoe Tavern is still there. A bearded, long-haired sidewalk artist was creating a chalk drawing as we passed. A beefy biker type came out of The Horseshoe.

We walked a few steps. I looked to my daughter and she laughed. We kept on, to a sushi restaurant she had found online. We were a bit early for dinner, but there were no other customers. During our meal the only person to come in was a food-delivery person, picking up an order. He was wearing a Vancouver 2010 Olympics jacket, those turquoise ones  that were everywhere in Vancouver back then.

Because the hotel breakfast buffet was unreasonably expensive, we decided to drop into the Loblaws and pick up some bagels or something. This is where we discovered that panic had set in. We waited in a long line to buy 4 bagels, 4 apples, and a box of granola bars.  The world was getting scared.

We took the subway, not very full, from Osgoode south around the loop to Dundas.  We climbed the stairs to Dundas Street. The young man in black was there, shouting into his fist.

We hurried back to our room and washed our hands really well.

Posted by Hugh Griffith at 9:45 PM