We escaped the city, which was at a state where increasing numbers of people were wearing masks and inventing ways of opening doors without using their hands.

A relative who lives an hour north of Toronto drove down and picked us up and took us to Niagara Falls. People who visit Toronto for the first time will take a side-trip to the falls (an hour and a bit drive around the end of Lake Ontario, past cities such as Oakville, Burlington, Hamilton, Grimsby and St. Catharines. I was born in St. Catharines and lived there until age 9.  Our house was only 10 miles from the falls, so going back to Niagara was for me like going to a home deeper than my longtime Toronto home. I love Niagara Falls, the geology, the hydrology, the geography, the sociology (i.e., the weird museums), the history, and the hydroelectricity. I did multiple grade school projects on Niagara Falls. I would have enjoyed grade school more had Niagara Falls been a larger component of the curriculum. 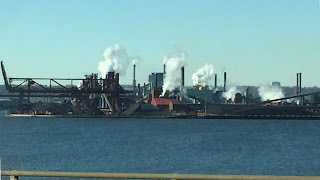 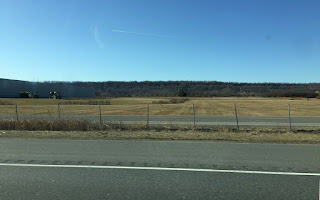 The Niagara Escarpment, from near Grimsby

All the Niagara Parks facilities, except the washrooms, had closed the day before. (Our timing remained impeccable.)

We parked at a lot above the falls and walked along the river to the cataract (which is a great word in this context). It was a sunny but cool day, and mist was freezing in the branches of leafless trees. 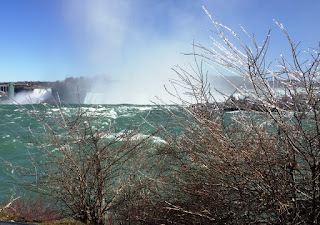 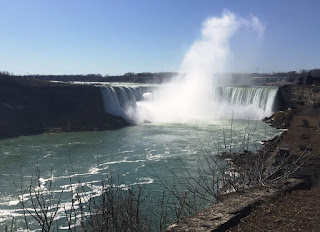 But we didn't linger. We had lunch at a diner-style restaurant (non-Parks businesses were still open), and then headed back to Toronto. 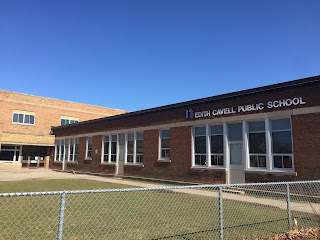 We diverted through St. Catharines and visited my first school. It's always fun to show your children where you went to kindergarten. It helps humanize you. (Or something, I dunno. Maybe it just bores them silly.) Last year was the school's hundredth anniversary. Many a Niagara Falls project has been forged here. 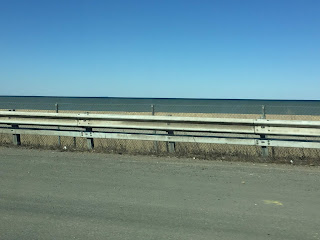 Here you have to squint. On the horizon, between fence posts 1 and 2, you may be able to make out Toronto on the north side of Lake Ontario, about 30 miles (50 km) away (from St. Catharines on the south side). Who knew the apocalypse would start with crystal clear weather? 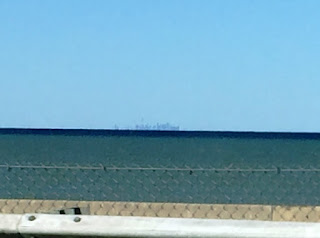 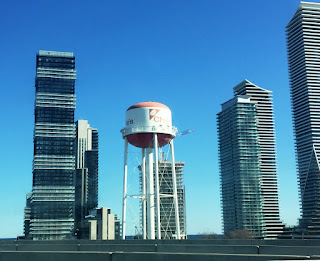 Driving back into town. Here's where the changes jump out at you. Mr. Christie's tower used to stand alone against the sky. 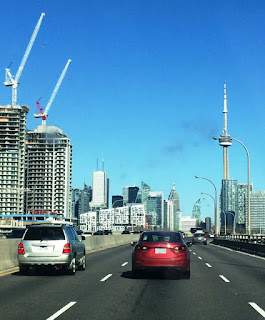 And more and more. The cranes keep moving as the city shuts down. No wonder Toronto is visible from 30 miles away. 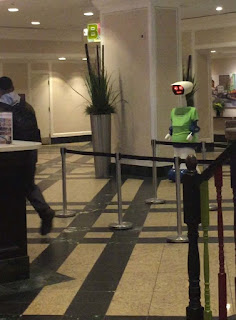 Back at the hotel, people were checking out as the news was becoming increasingly worrisome. The hotel attempted to calm us with a robot cruising the lobby, singing "Always Look on the Bright Side of Life." (It was Eric Idle singing, with the robot's LED mouth lip-syncing the words.) The calming attempt was not successful.

Or perhaps the hotel was trying to rid the lobby of loiterers, in which case it was very successful.

We went to our room and washed our hands really really well.