Home? Part 5 (There's only one more part after this.)

Back in pre-apocalypse times, when I booked the trip, the travel agent said, "One more day costs only $180."

There is so much to do in Toronto. Why not?

But there wasn't anymore. There was nothing to do, and our flight home was on the following evening.

"We should go back to the U of T bookstore," my daughter suggested. We had to buy a birthday present for her brother, and we knew that the bookstore was open. We could get him a cool hoodie as the world went dark. Incidentally, the U of T bookstore (at College and St. George) was originally a Carnegie Library. (You can look that up, there's probably time.)


We walked there. Along the way we came across a woman lying on a heat vent near the old Botany Building, which has had its sunshine stolen by a shiny new biomedical building that rises on stilts. A man ran past us, to the woman, holding a dozen eggs. 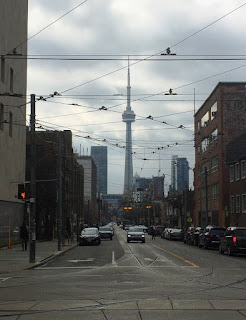 
We carried on and were the only customers in the U of T Bookstore.  We bought a cool hoodie from a woman wearing black latex gloves. We retraced our steps. The man with the eggs and the woman were snuggling on top of the heat vent.

We got on the subway at Queen's Park to ride the loop to Dundas. 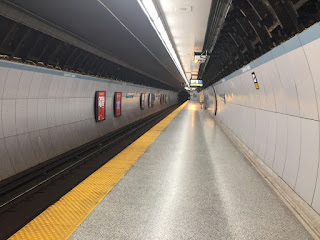 Queen's Park is one of the aesthetically pleasing, rounded, bored-out stations, as opposed to the crass, square, cut-and-covers. This is what it looks like when you're the only passengers.

We got to the Eaton Centre with a mission to buy my wife something nice from a clothing store that doesn't exist in Vancouver. We already knew where it was thanks to scouting trips on previous days. Many of the stores in the mall were closed, and the bottles at the hand sanitizer stands were all empty. The intended store was open, but on reduced hours. We were the first customers of the day, and headed to the petites section. We knew better than to guess and so started systematically taking pictures of clothes and texting them to my wife in Vancouver so she could decide. The store manager was amused by this and helped with our task, holding out likely items.  She told us she was originally from Vancouver, but now lived in Toronto. I told her I was originally from Toronto, but now lived in Vancouver. Life is hilarious. I told her we couldn't wait to get back home.

A woman spoke from behind. "Good luck with that," she said.

We looked at her. She was wearing a grey skirt and a grey jacket. She had a snooty face.

"They've closed all the airspace. All flights are grounded," she said, snootily.

I looked at my phone, which had been feeding Canadian Covid19 alerts for the past few days. It had said nothing about domestic travel restrictions.

"I work in public health, so I know. The first thing we do is shut down flights. They spread disease like wildfire."

The store manager said to her, "Can I help you with something?"

"I'm just checking to see what stores are open. I'm surprised you are."

"I'm waiting to hear from head office," said the manager.

Snoots left the store and the manager was apologetic. as if it were her fault that a random nutball had decided to scare the crap out of an anxious dad and his teenage daughter.

Ding, a text. We got an approval, made a purchase, and headed for the food court. We knew that our hotel was no longer serving lunch, which, a buffet, was a sneeze magnet. 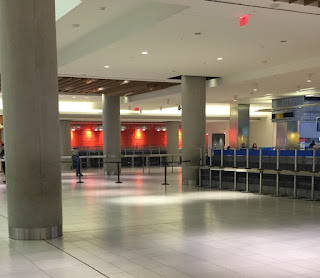 The tables and chairs at the food court were stacked against a wall and the seating area was ribboned off. A few vendors remained open, selling takeout. I ordered  brisket curry at a Thai place and was given most of a day's worth of meat, an inkling of the feast-famine nature of apocalypses. 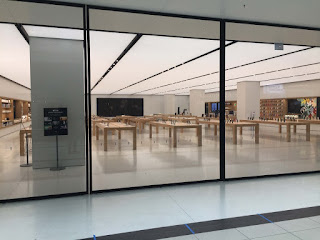 Yup, the Eaton Centre was closing down.  It was like being inside a dying whale. We escaped its maw and hurried up Yonge. The sidewalks were empty, no proselytizers, no man in black shouting into his fist. We got to our hotel, opened the doors with our hips, washed our hands extremely well, and over-ate in our room.

Post-prandially, daughter decided to face-time a pal. She showed her our room. She showed her Doug Ford on television. She showed her Toronto out the window. She told her that the University of Toronto was weird. a bunch of little old castles in the middle of the city. 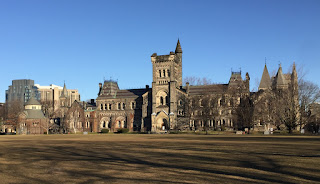 Here's one of them.

Later: although we had consumed over-sized lunches, we thought we should still go for dinner, to fatten up for the lean times.

We discovered that the hotel had closed its dining room for all meals. 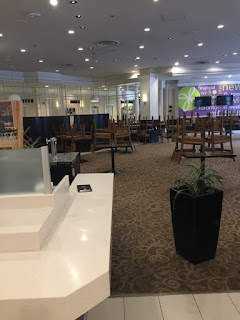 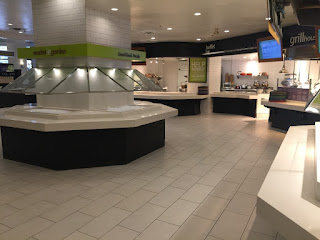 You could order a pizza from the kitchen, though. which we did. It was thin on cheese and overloaded with oregano. We each had a slice and then banished the thing to the balcony. 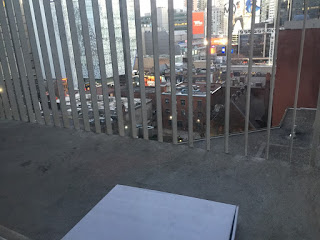