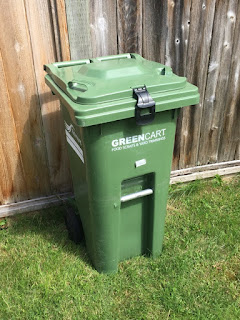 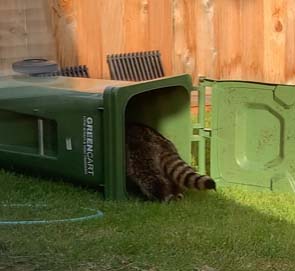 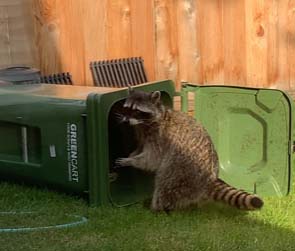 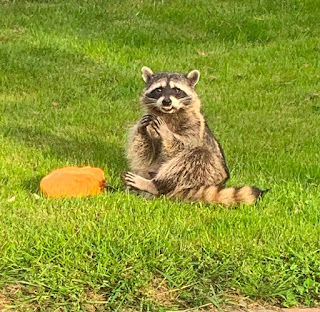 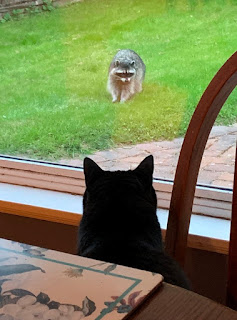 Carnivores, sort of. After the clean-up, raccoon is back, feeling for stray bread crumbs. Cat is just mad.
Posted by Hugh Griffith at 5:50 PM

Hey Hugh - I've been looking at old favorite blogs in these weird times as a reminder to myself that nature keeps going. We had problems with our bins at the beginning of the pandemic in our part of California. With the March rains and over a month, I set our bins out to get a natural shower. Then I heard them rattling in the middle of the night. Cute footprints were all over the freshly washed bins with trash strewn everywhere. I finally got a look, and it was a small raccoon that was so agile to get in and out of the bins. I tried to educate our neighbors about how to separate our waste. And now we keep two bricks on top of the current black garbage bin. Our blue recycling shouldn't need protection from the raccoons anymore. And our management company won't let us get a green bin for compost, so I sometimes add stuff to our neighbors' when they set theirs out. I do three kinds of composting at home, and I sometimes wonder if it's worth all the effort in addition to the trash and the recycling. Hmm, I don't think I could deal with that bin latch. Practicality is not often thought of in new products. Did I ever mention to you that I wanted to invent a new garden weasel? Cheers, Hugh! : ) Katie

The picture with the coon sitting next to what looked like a birthday cake (before I read the story and found out it was bread) was so funny. That raccoon looked to me like it was applauding. Maybe you just couldn't hear it because of it's soft little paws.

Who opens the garbage bin faster--the raccoon or you? Just curious.