Dodos and other Dead Things 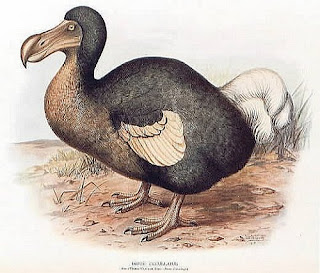 I have lifted the stuffed skins of passenger pigeons from museum drawers. These were sad remnants of a species that once existed in the hundreds of millions, perhaps billions, whose migrating flocks blacked out the mid-day sun. I remember being enthralled by such stories as a child -- and still am. Despite their numbers, their needs and behaviour caused their doom -- no match for the needs and behaviour of European settlers. The lake where I went to summer camp is named Pigeon, one of many places in eastern North America that commemorate this bird, places whose names are now unknown answers to unasked questions. I have always had a desire to go back in time and see these birds before their decline.

I worked in Bermuda, where a friend was a conservation officer. Bermuda was settled relatively quickly after an accidental rediscovery-by-shipwreck in 1609. At that time, it was alive with seabirds, including the nocturnal, burrow-nesting Bermuda Petrel, which quickly succumbed to the onslaught of introduced vermin, pigs, and pets. Believed extinct for centuries, it was rediscovered in the mid-1900s, and through the very hard work of relatively few individuals has been nurtured back from the brink...but barely. These are birds that spend much of the year at sea, in the hurricane-prone waters between Bermuda and the US mid-Atlantic coast. My Bermudian friend expressed to me, more than once, a desire to go back to Bermuda pre-1600, to see what it had been like. The birds, the sea-life, the vegetation....it must have been heaven.

I was reading a magazine article about dodos (Ian Parker, Digging for Dodos, The New Yorker, January 22, 2007), whose Extinction Clock started ticking in 1598, when hungry, thirsty Dutch sailors en route to Indonesia came ashore on Mauritius. By the time the Dutch departed in1710, this ungainly, flightless, massive bird was long extinct. I felt a kinship with Julian Hume, the paleontologist and amateur artist featured in the article, who wanted to time travel back to 1598 Mauritius to paint the birds.

Baselines shift so quickly that I would be happy to go back to almost anywhere even half-wild only one century ago to see what it was like. It would have been dazzlingly different. My children were born into a world of lesser diversity than the world of my birth. When I was born, the life on this planet was greatly diminished from the time my parents were born, and so on. Unless I tell them, my children will probably never hear of passenger pigeons, because the extinction of this once dominant species is old news. It was already old news when my parents were born.

The Dodo is older news still, so old that no one knows what they really looked like. All who want to go back in time to see one, meet me at the wharf, next to the caravel.

Posted by Hugh Griffith at 2:05 PM

I've recently read decades-old accounts of our BC Coast being thick with dolphins, whales, and basking sharks, so much so that they were a nuisance to fisherman and that they'd be shot at just for that reason. It's sad that it takes a decline of an animal for people to recognize their significance.