The Quest for the Giant Salamander, Part One.

Perhaps I became a zoologist the summer my parents rented a cottage in the rugged Canadian Shield country north of Toronto. That is where I rolled a piece of cordwood to discover my first Red-backed Salamander, a shiny noodle-thin animal with tiny limbs and a charming, bright-eyed face. I was hooked.
Years later, as a graduate student, I was again in the shield country in the warming days of early April, assisting my friend and lab-mate, Les, with his genetic studies of the somewhat heftier Blue-spotted Salamanders that bred beneath the ice of beaver ponds. It was great fun, waking early and toiling late into the night, trying to decipher the workings of the lives of creatures unknown to most of the world.
Les and I lost touch, until this past spring when we met on the UBC campus. It was soon clear that could not escape our old selves — in no time at all we agreed to a quest, to find a Coastal Giant Salamander, a species that in our younger days was exotic, mysterious, and far away. The Coastal Giant is aptly named, a thick-bodied, bulgy-eyed behemoth that dwarfs the species we had known in Ontario. In its own way it is beautiful, as are all salamanders.
Within a week we were heading up the Fraser valley, with only vague information from field guides to help direct our search. Range maps for the species show indiscriminate blobs covering the Chilliwack valley, and range descriptions say, "in and around the streams that run into Cultus Lake and Chilliwack Lake." Not a lot to go on. 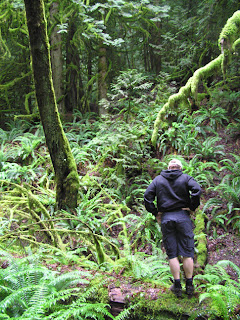 Les on the hunt.

Even knowing that giant salamanders are found at a particular locality only slightly improves the chance you might see one, because they will either be within fast-moving, boulder-strewn streams, or in tunnels or other spaces within the soil. They are one of many little-known, almost invisible animal species in southern BC that are in danger of disappearing as mountainsides are cleared and development spreads through the lowlands. They are provincially Red-listed, which means they are considered threatened in the province.
We picked our way up the banks and through the numbing water of streams along the south shore of Cultus Lake, carefully checking beneath what biologists call, "coarse woody debris," what normal people call, "logs," striving to leave things as they were, keeping in mind that any contact with wild things can cause harm. One aspect of salamander searching had changed since we were children, or 20-somethings. Back then, we only grunted when straining to turn the log or stone, not when merely crouching down to grasp it. 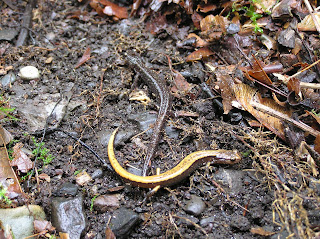 Western red-backed salamander, Plethodon vehiculum.
Several logs harboured Western Red-backed Salamanders, slender, lungless cousins of the salamanders from the cottage woodpile in Ontario. This species lives in the damp niches of the forest, breathing through its skin. Eggs are deposited on land, and guarded by the females until hatching. We found that Western Red-backed Salamanders can also have yellow backs, or can be entirely black. It is possible to find several beneath a single sheet of bark, all of different colours. Very nice, but not the Coastal Giant.
That day we travelled from Cultus Lake to Chilliwack Lake and back, without success. We would have to try again. It had become an important thing, this quest, which started, now that I think about it, when we were children.


The Quest for the Giant Salamander, Part Two.
Posted by Hugh Griffith at 5:06 PM

How cool and never seen a western red-backed Salamander. I can't wait to see part 2 of this!

Do they ever spend time in water, or are they only land dwellers? My friends and I saw aquatic salamanders (orange bellied) MUCH smaller than the mudpuppies I've seen in Jasper AB and Southern Ontario. We were at Rice Lake BC and there were 3 swimming around in the lake.

To Anonymous, the ones you saw in Rice Lake are most likely Rough-skinned Newts, Taricha granulosa.