The Quest for the Giant Salamander, Part Two - The Perfect Stream.

Two weeks after the previous attempt, my former colleague, Les, and I were again driving east, toward Chilliwack, determined to find our large amphibian Grail, the Coastal Giant Salamander. We planned to circumnavigate Cultus lake as much as roads allowed, and stop at every roadside stream that seemed "right."

We had a slightly better idea where to look, and a slightly better idea of what "right" was. Giant salamanders live in and around mountain streams, their lives connected to the cool, oxygen-rich water and adjacent humid slopes. The fast-moving water should be interrupted by placid pools in which eggs are laid and larvae hatch and grow. The stream has to be shaded, in old growth or well established second-growth forest. A peculiarity of the species is that some individuals never fully transform to adulthood. These neotenes grow large, but retain their external feathery gills and never leave the water. Therefore streams have to be large enough not to dry up in late summer, on mountainsides that have been undisturbed for many years.

There would have been many more such streams a century ago, even a few decades ago, before clear-cutting scalped the upper slopes of the region, burdening the watercourses with silt and slash, and unwittingly snuffing out one amphibian population after another. A century ago, a hunt for a giant salamander would have been little challenge at all. It would also have been rather low on the average pioneer’s "to do" list.

Stream after stream we climbed, with no sign of the creature. What was wrong? Was the flow too weak, a seasonal trickle that would run dry in August? Or was it too powerful, would wash larvae away? Several promising hillsides were inaccessible, being either on private property or Department of National Defence land, whose signs warn you off in both official languages.

By late afternoon we were heading south, and the GPS unit teetering on the dashboard indicated we were approaching a thick black line — the US border. We could see its scar cut through the forest up ahead, where on the other side there were likely many giant salamanders waiting to be discovered, but also over-eager Minutemen, video cameras and heat sensors. In this world of shoot-first, ask questions later, we decided not to risk it, especially when the answer is, "Uhh, looking for giant salamanders." It seemed the end of the road, and of our quest, when suddenly there it was, sparkling through the trees, white water tumbling over rocks, running down to the ditch, the perfect stream.

We searched and searched, bent over, backs aching. I found myself asking, Why were we doing this? Les, too, was having doubts, suggesting reasons why, perhaps, this was not the perfect stream after all — canopy too open? Wrong under story? "They’re here!" I asserted, without any justification. I was standing few feet from the stream, next to an ancient maple, its thick base collared by sheets of loose bark. "They have to be here," I repeated, determinedly. I turned to head uphill.

As I moved away, Les stepped forward and folded the bark from the tree. "Hey," he said. And then, as if announcing the winner of a contest, "The Coastal Giant Salamander."

There it was, nestled in the loamy dirt, a blunt-headed, bug-eyed creature, mottled black and copper, the real thing. It was exactly where it should have been, doing exactly what it should have been doing, but still we were surprised, for how often do you find a Grail, no matter how hard you search?

After taking a few pictures and returning the creature to its home, I turned the GPS back on, to mark our location. One by one the satellites appeared on the little screen, until finally a reading was granted. It was a sign from above, our quest was done. 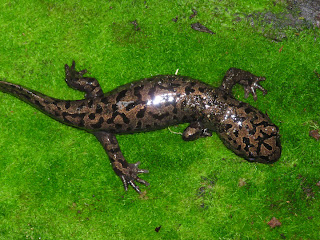 Posted by Hugh Griffith at 4:53 PM

wow, look at that Giant Salamander . . love it's chubby wrinkles!

Cool post. I'm sure in your search you found lots of other neat things too!!!!

Oh, my. I read with anticipation as if reading the top rated mystery novel of the year! Congratulations on your determination and your eventual success. I enjoyed this post like so many of your others. Thank you for sharing yourself.

I am SOOOO jealous. What an adventure! You've revived my interest in turning over more logs. I've only once found a Ensatina salamander (in our yard in Burnaby, BC!) and it was a treasured memory. (In fact, I had to keep it for a few weeks and had a hard time letting it go again.)