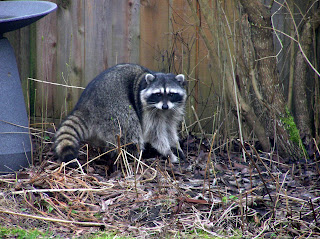 Randy Raccoon.
As a rule, suburban neighbourhoods are inhospitable to wildlife, and for many species are just this side of the end of the world. Others, whose needs are not too tightly tied to the natural environment, are able to live within these altered places, some quite successfully. A conspicuous example in the Fraser River Delta would be the ubiquitous, very vocal crows, who seemingly have memorized garbage pick-up schedules, thus know which blocks of city to haunt each day. Then there are those we rarely see, that work the night shift, until something draws them out into the light, something more important than a good day’s sleep.
A few days ago, breakfast was interrupted by a hair-raising shriek from the back yard, a sound halfway between bobcat and human infant. My children looked at me. Because I am the tallest, it is my job to deal with such things. I opened the blinds. Two raccoons were slowly making their way along the back fence, almost nose to nose. A smaller one was cautiously walking backwards, followed, a foot away, by a larger one. They paused every few seconds and waved their paws in front of each others’ faces, as though trying to communicate, but too flustered to find the words. Then the smaller one would shriek.
My son, who is seven, declared, "They are rivals."
"Could be," I said, but guessing the flip-side. I suspected we were witnessing an early, awkward stage of raccoon love, the larger, amorous male pursuing the smaller female, who was yet to be convinced that this was a good idea.
Seeing the raccoons was not in itself a surprise. We see raccoon tracks in the snow after every storm. These animals thrive in suburbs throughout North America. Raccoons are smart and adaptable and know how to obtain food from gardens, garbage cans, and pet bowls. Sheds, attics and chimneys provide housing. It was unusual, however, to see them in broad daylight, because typically they are almost entirely nocturnal. 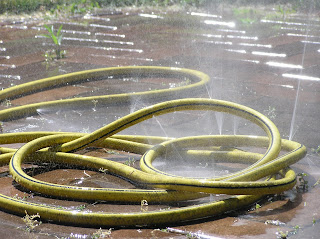 Soaker hose, courtesy of raccoon(s).As I have blogged about before, bitterly, our back yard has fallen prey to their legendary mischief. Once, they chewed all the way along a garden hose, which resulted in unexpected hilarity the next time I turned it on. Later, they totally destroyed an inflatable wading pool — puncturing the sides and shredding the bottom. In nature, they would be foraging in ponds or streams, using their sensitive paws to feel beneath rocks and logs. I wondered if they might have been searching the pool for aquatic prey and, finding only a submerged plastic Dora the Explorer, became enraged. Or perhaps they simply have a innate animosity toward inflatable pools.

Although I could not find anything published in that regard, what I read about their life history led me to believe that I was correct about the fence-top pas de deux. Our raccoons were on a date! In relatively mild areas of North America, including south coastal BC, courtship occurs in February. Strangely, apart from the timing, not a lot is known of the courting behaviour of this very common animal. One aspect that has been noted, though, is the abandonment of their usual nocturnal schedule to engage in daytime consorting, known as "diurnal association." Wow, so that’s what we saw.

The raccoons followed the fence to where it becomes hidden behind the neighbour’s cedar hedge, and the shrieking ended. Assuming things worked out, in two months, some lucky homeowners may discover between two and seven raccoon kits, trilling sweetly like birds, somewhere on their property. By about mid-June, the kits will start to explore the neighbourhood in the company of Mama. In the dark of night, she will show them where to find food, and how to dispatch pools, hoses, and other affronts to their sensibilities.

The raccoon pair had also drawn the attention of about a dozen crows, who gathered in a nearby cherry tree. Instead of scolding mercilessly — what crows do best — they remained silent, looking down, clearly watching the raccoons. Crows, who own the day, were struck dumb by the romantic antics of these creatures of the night.

Posted by Hugh Griffith at 2:46 PM