Following from yesterday, more on avian migration. Almost a year ago, shortly after it was published, I read Bridget Stutchbury‘s Silence of the Songbirds. I posted my impression of it on a blog that no longer exists, so I will be lazy and simply repost it, now that we are in the early stages of 2008’s spring migration. Interestingly, though, a web search for an image of the book cover shows that the bird book marketers, like migrant songbirds, do not sit still or retain a single plumage. I found at least two new cover versions, one of which I have decided to use because I mentioned the depicted bird in the review. The previous book cover (the one I bought) bore the image of a Northern Oriole. The new cover is wordier, has lost its original subtitle, “how we are losing the world’s songbirds and what we can do to save them,” and has gone blue, now sporting an Indigo Bunting. I love Indigo Buntings, by the way. The first one I ever saw was in a bush in the subway cut on the Yonge line north of Rosedale Station in Toronto. The rush-hour train was stalled and there was the bird, just outside the window, bouncing around in a bush. A bouncing bunting in a bush. I couldn’t contain myself. I blurted out, in the crowded car, “Look! An Indigo Bunting!”

Anyway, Here is a review of Silence of the Songbirds. By Bridget Stutchbury. 2007. Harper Collins. Toronto. 256 pp. 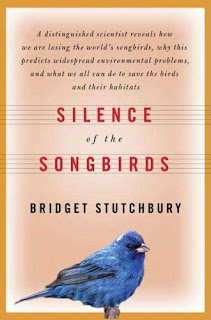 Here in British Columbia spring songbird migration is as relentless and exciting as a slowly dripping tap. In southern Ontario, where I grew up, it exploded on you like Christmas morning. I read Bridget Stutchbury‘s Silence of the Songbirds, a title clever perhaps in its chilling allusion and its foreboding, at the time of year when as a teenager I would get up early on weekend mornings and ride the subway west to High Park.
I would start at the north end of the ravine that leads to Grenadier Pond and, if the recent weather pattern had been favourable, achieve a state of overstimulation, brought on by the masses of warblers, vireos, gnatcatchers, thrushes, orioles, tanagers, even non-passerine exotica such as Woodcocks and Black-billed Cuckoos — I still have dreams about those times.
So to have something that seemed to be true, i.e. the apparent decrease in numbers of migrant songbirds as described anecdotally by old-timers demonstrated to be almost unquestionably true, has put me in an Indigo Bunting-blue funk. [Yes, there it is, the bird on the cover!]
Songbirds are disappearing, and Bridget Stutchbury explains why. She starts with descriptions of the double lives of our summer residents, how in the other half of the year they are important components of tropical ecosystems. She also speaks of their declines and hints at the grim stories to come, the array of changing, degrading circumstances devastating to creatures that have well-defined annual cycles, results of millennia of evolution.
Chapter 2 starts with something really cool. Doppler weather radar of uncountable migrants flying north across Lake Ontario. I love when a technology developed for one purpose has an even more impressive use -- like when I affix my GPS to the handlebars of my bike and use it as a speedometer. I can imagine myself as a teen in Toronto watching doppler radar on the internet, salivating. But the radar reflections are getting dimmer and the book gets more depressing. 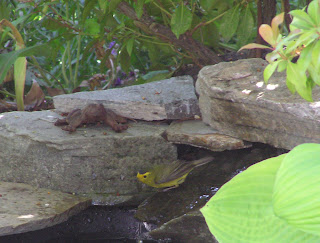 The Latin-American rainforests and grasslands, where our northern insectivores become southern frugivores, are disappearing and becoming increasingly fragmented. There is not enough prime habitat to go around, habitat that maintains individuals at a condition ready to face the oncoming northward journey.
And coffee — the conversion from shaded coffee growing, which to some degree approaches the natural state of a forest, to unshaded coffee monocultures has had devastating effects on bird population, the environment in general — and on the quality of coffee.
Chapter 6, about pesticides, made me want to stop eating anything. It describes the horrific effects of misuse and overuse of pesticides in Latin America that kill birds outright or through the poisoning of their prey or through removal their prey. I am reminded that the most recent Bird Studies Canada online newsletter speaks of the downturn in two migrant aerial insectivores — Common Nighthawk and Chimney Swift — two more old favourites, recalling the skies over the University of Toronto. At day there were swifts. On warm summer evenings, nighthawks.
There is a chapter on impacts with buildings, wind turbines and towers, how these hazards are so densely and treacherously placed along migrational flyways. Just this week in Toronto was a display of bird kills among the city’s skyscrapers. [Reminder: this was written in May 2007.] 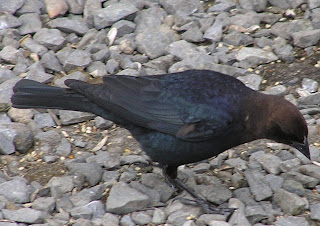 Brown-headed Cowbird, Reifel Migratory Bird Sanctuary.
Then there are the natural hazards given unnatural advantages. Thanks to the clearing of forests and expansion of farmland, Brown-headed Cowbirds have done well at the expense of those species that evolved with them, and especially those who had never met a cowbird before.
I found Chapter 9, "Living on the Edge," fascinating. As woodlots shrink, increasingly becoming "edge" habitat, passerine diversity decreases. This may not be due to "edge effects," such as the assumed easy access of cowbirds to near-edge nests, but rather may be due to the lack of total space and a songbird’s lust for, um, lust. They want to live in large forests where there are many opportunities to fool around. And there aren’t many large areas left.
And again, modern technologies -- miniaturization of electronics, advances in radiotelemetry, and DNA sequencing -- are used in clever ways their developers probably never imagined to shed light on a secret world to help better explain the things we can see but clearly don’t fully understand.
It is a good book but even that depresses me because people don’t read books unless the Best Sellers List tells them to, and best sellers lists rarely have much to do with quality. I hope a lot of people read this book, especially young people.
As I finished reading on May 4, sitting in my backyard below a Japanese maple whose leaves were out, yet still soft and drooping, I heard a chip note overhead. It was a shy, soft note, not one of the usual suspects, therefore bound to be something good. I pished, once, twice. The bird jumped sideways in the tree, halfway into view about eight feet away, its yellow belly and black wing showing. I pished again and it lowered its flame-orange head to look at me. A Western Tanager, which winters in southern Mexico and Central America. With camera nowhere nearby I was left only to look at this creature as it looked at me and with the text of this book swirling through my head, ask, "How on earth did you manage it?"
Posted by Hugh Griffith at 4:23 PM

Thanks for re-posting this review--I didn't know about your old blog, so it's all new to me. The book sounds great--I've added it to my wishlist.