Who's singing at the park?

Lunch hour at the park. High school kids walk through on their way to the Seven-Eleven. The air is filled with song. High in a cottonwood a Black-headed Grosbeak is robinning away, invisible behind leaves now fully out. Singing lower down are warblers - Wilson’s, Yellow-rumped, Orange-crowned and, in the pond-side birch and willow, Common Yellowthroat. Cedar Waxings are out in force, sree-sreeing from tree to tree. 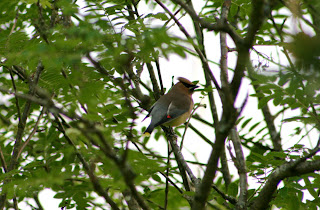 Sree.
At the pond, the Red-winged Blackbirds are noisier and more jittery than last week, suggesting an active nest within the Spirea. The female flew at me twice and the male took up a sentry position high above on a snag. He wasn’t particularly useful -- all show, no action. 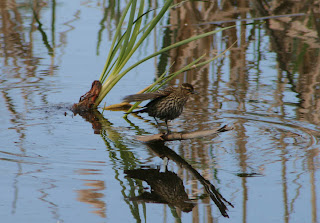 Female red-wing, being feisty rather than cryptic.Also at the pond, the lonely Pied-billed Grebe continues to defend his territory against imagined rivals. Cow-cow-cow-cow-cow- cowp...cowp...cowp! No rivals, no potential mate either, here in a man-made pond in the bleak heart of suburbia. 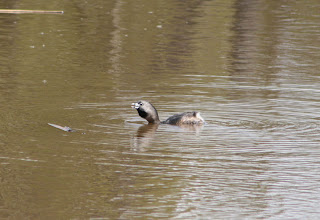 The grebe calls again, this time unseen within the cat-tails. A teen-aged girl stops and stares, wondering what is making this jungle call. “It’s a Pied-billed Grebe,” I said, which meant nothing. “It looks kind of like a little brown chicken.” Strange man explains strange noise, attributes it to strange bird.

“Oh. Thank you for that information,” she said.

Then the strangest of all. Four Grade 8 boys coming down the trail, belting out a screechy version of Video Killed the Radio Star (The Buggles, Age of Plastic, 1979 -- I looked it up). They had the whole song down pat. Obviously a favourite; one of them must have found it in his parents’ record collection.

Posted by Hugh Griffith at 2:51 PM

Nicely built entry! I love including the boys at the end--and I know the song, (which my son introduced to me, not the other way around, oddly enough) so I could "hear" it happening.
--kate

Thank you. YouTube reveals all to our children; our teenage bedroom walls are theirs to scrutinize. Some songs past the test apparently.

Waiting for some Blondie, but Jimmy Buffet would be cooler.

Nice! Ceder Waxwings are so beautiful! During a thunderstorm / downpour a couple weeks ago, there was a pair of them in my neighbours' holly berry tree! (The tree is on the border of my yard & the neighbours' yard). I have never seen one until now! I raced insude for my camera, but by the time I was back out on the deck, they were gone.