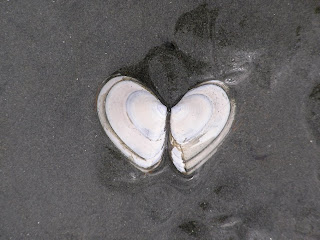 
The interpreter was with a group of fifteen grade one students and their teacher, a young woman with wispy blond hair and an interesting nose. It came to a sharp point, but just before the tip was bent sharply to one side, like a plasticine nose tamped on the end. "This is called a heart cockle," the interpreter said, holding a thick, ribbed shell for all to see. "What other clams can you find on this mudflat?" They dispersed.

"What’s this one?" asked a little boy.

"This one is purple!" said a different little girl.

"A Varnish Clam," said the interpreter.

"What’s this?" asked a little boy.

The teacher reached forward. "What’s this white one?" It was a mid-sized, white clam, bent strongly to one side at its narrower end. It was called a Bent-nose Clam.

The interpreter held it in his hand, and looked up at the teacher’s young face, at her bent nose.  What could he say? 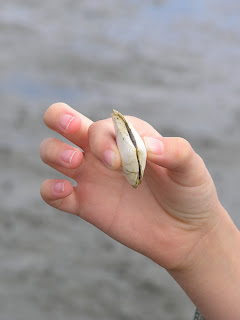 The Bent-nose clam, Macoma nasuta, has white valves and grows to about three inches in length. The distinctive bend at the posterior end explains its common name. Unlike other mud-dwelling clams, instead of orienting itself vertically, the Bent-nose reclines on its side with the concave valve up. This directs the bend upward, and from there the incurrent and excurrent siphons extend toward the surface of the mud.
Posted by Hugh Griffith at 2:16 PM

This one made me laugh! ...and somehow reminded me of the time I learned about geoducks...