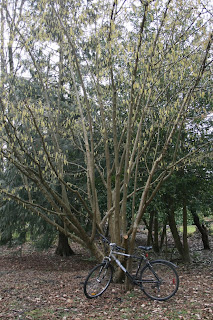 A hazelnut tree (this one, a European Corylus avellana, I think), with its strong, narrow, divergent trunks, provides a handy place to lock a bike. After fiddling with lock and keys, I take a closer look at this bike rack of convenience, which is in flower. 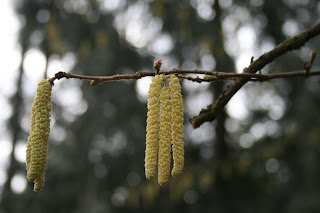 Hazelnut male flowers (and one female, above triple cluster).

Most conspicuous are the male flowers, the dangly yellow catkins. But then another colour catches the eye--tiny female flowers, represented by groupings of extended red pistils, on separate short shoots. 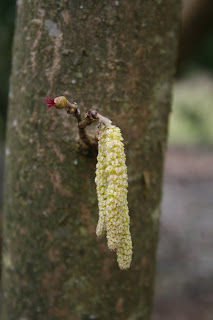 "Flowering habit is unusual. Both and flowers are initiated the summer prior to harvest. Female flowers lack perianth and ovaries at the time of pollination in mid-January to mid-February; the pollen tube grows to the base of the style and becomes quiescent until 5-6 months later (June), when the ovary and ovule develop. Fertilization then takes place in July, and the nut rapidly develops, maturing by late August. "

How about that. After pollination, fertilization is delayed for several months, during which the incomplete female flower develops further. 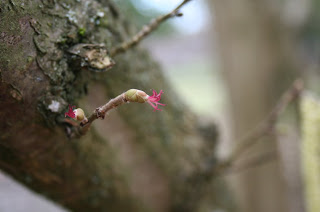 Hazelnut female flowers.
Other members of the same family (Betulaceae --alders, birches, etc.) also have dangly staminate catkins and very different female flowers, which start as bundles of pistils but then develop into cone-like structures (see fourth picture here). At least at some point they possess an element of "catkin-ness" (a zoologist's take on plant morphology). Female hazelnut flowers, which eventually transform into small clusters of nuts, don't seem to do that. Something to keep my eye on.

There's not a lot to learn from a plain old metal bike rack.

Now leap five months into the future!
Posted by Hugh Griffith at 1:00 PM

So great. I think I might have unknowingly photographed a Hazelnut tree last spring. Now I know! Thank you.