It's so nice to have a large, eclectic garden in the neighbourhood. Today and yesterday, as part of an open house organized by the Richmond Garden Club, I led nature walks among the trees and flower beds of Paulik Park, and because both times I was accompanied by members of the club, I probably learned as much as anyone. Spring is really racing along, and I believe we were all surprised at how quickly things are developing. 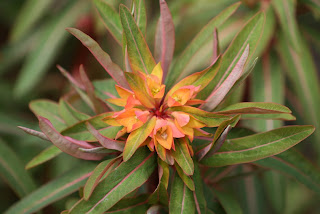 Among today's finds was this colourful Euphorbia, which yesterday was still sound asleep. 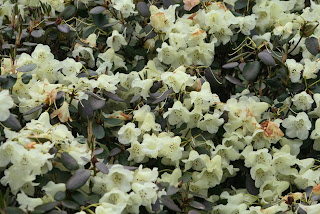 This Rhododendron was quite an eyeful too. The leaves are almost purple, and the flowers are not white, but very pale green.

At some point we started talking about the rhubarb-like plant. Not Gunnera, there'll be time for that later in the season. Right now, it's the one with the large rounded leaves, Petasites japonicus, which turns out to be two plants in one. (Apparently a trait of the genus, which occurs throughout the Northern Hemisphere, including here in southern British Columbia.)

What I mean by that is that early in the spring, when the soon-to-be large, round, rhubarby leaves first emerge from the soil, there is already a flowering plant, a short, leafy-stemmed, aster-like thing standing there, blinking confusedly amid the absence of other plant life. I had seen this in another locality, and puzzled over it. How odd to see two very different and distinctive, obviously exotic plants growing side by side, and nowhere else. 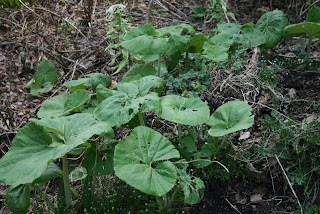 And then I witnessed this again, early this April in Paulik Park. I took photos.

A member of the garden club had identified the round-leafed rhubarby thing as coltsfoot, which is the name of a plant I know, but a different plant with deeply cut leaves (Petasites palmatus). But pictures in a gardening book showed neither the plant I knew, nor the round-leafed rhubarby thing, but the leafy-stemmed, aster-like thing, and the common name was given as sweet coltsfoot, or Japanese butterbur, or fuki (Petasites japonicus).

Oh. Both plants are sweet coltsfoot, or Japanese butterbur, or fuki (among other common names). The flowers appears first, and don’t last long. Throughout the rest of the spring and summer the leaves expand, and eventually end up slug-eaten and mouldy. There are a couple of batches of fuki in the park (the name I prefer because it’s the easiest to type, and that’s the only reason). We looked in vain for a remaining flower. 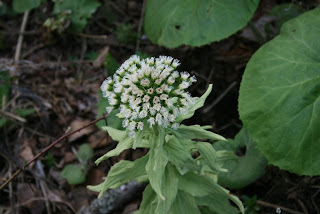 Fortunately I still had the pictures I took in April. Here’s what a fuki flower looks like.

Thank you to the Richmond Garden Club for inviting me to participate in this weekend’s events. I had a lovely time.

Posted by Hugh Griffith at 3:44 PM