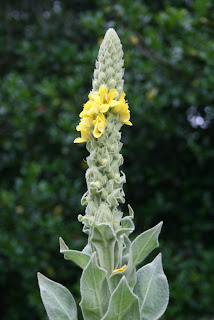 Mullein, Verbascum thapsus, is an old friend. It's an introduced species, native to Europe, northern Africa and Asia, and is naturalized in many parts of North America and elsewhere. It is a member of the Scrophulariaceae, the figworts, both of which are amusing names, at least to me. 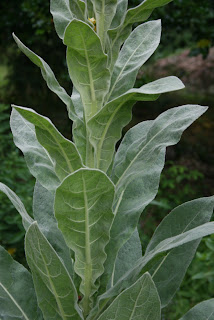 It produces large numbers of seeds, which germinate in exposed soil--why this plant is often found in disturbed areas associated with human doings: road edges, empty lots, etc. Although widespread, it isn't particularly invasive, likely because it won't grow in shady areas or among other established plants. It won't compete for sun; it wants to be alone.

Mullein is a biennial. In the first year it produces a rosette of velvety leaves. After the following winter, the flower stem "bolts," i.e., shoots upward, in some cases reaching more than two metres. It flowers gradually throughout the summer, with blooms progressing up the floral spike. The dried brown stems, topped by seed heads, may remain standing throughout the following winter and beyond. 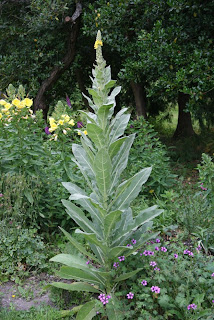 I consider it an old friend because it grew in cottage country, Ontario, where I spent my formative summers. I enjoyed rubbing the velvety leaves. I recall being surprised to learn that it was from somewhere else. Little did I know, almost everything growing along the roadside was from somewhere else, that this was the way of weeds.
There are several mulleins growing as specimen plants (or as if meant to be specimen plants) in Paulik Park, Richmond. The pictures were taken today.

Posted by Hugh Griffith at 1:24 PM

I am very fond of the Mullein as well and always have a few popping up around the garden.

First mullein turned up here last year--almost six feet tall. We were eye to eye, and one felt at a loss for conversational gambits.

I have wanted to add this plant to my garden but worry that I would have it and nothing else in a few years. Saw a bunch today, must have been in their first-year phase, since they were just low and fuzzy. Nice how we have fond associations with childhood plants.

I'm with ya Hugh - Mullein are cool. They grow here and there around my brother's place by Yosemite, and they make good photo subjects - the fuzzy leaves are especially pretty when covered with morning dew, and all sorts of birds are attracted to them when they dry out.

Looks like the extra Spring rains have caused a bumper crop this year too. I look forward to enjoying them all Summer.

This is one of the plants that are familiarly known as "white man's footsteps"-- everywhere "Europeans" go, there they are! Good post on them...

I have to admit I've been a bit indisposed to them of late, especially in the wild, but I do recall noticing (back in high school) that the flowers smelled like Brylcreem. Also, the seeds look a lot like caterpillar droppings. Wonder why...