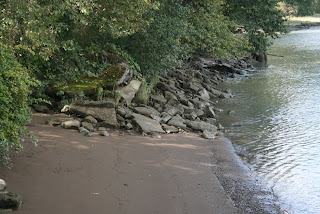 As I described in last year's post for International Rock Flipping Day, I live in a largely rockless place. I made do with some garden rock flips. This year my plan was to get out of town, hit the Vedder River near Chilliwack, where it is a fast, relatively shallow, rock-strewn river, and partake in some shallow-water rock-flipping. Were that to turn out a bust, I would go ashore and flip forest rocks.

It was a good plan. If only I had had a chance to carry it out. Familial entanglements and the social lives of six-yr-olds made the five-hour block of time needed impossible, so I had to improvise. I took a quick trip to the North Arm of the Fraser River. I was sure I'd seen lots of rocks there, well, rip-rap anyway. (The dikes that surround this city are bolstered by chunks of broken pavement, etc.). It's very attractive. 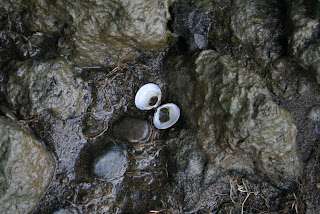 But not very lively. The only sign of animal life I found after the first dozen flips was death--the valves of a small clam. 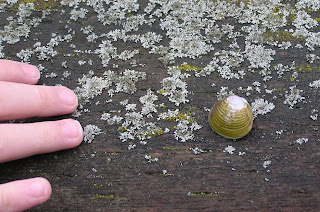 We have met the remains of this creature on the river before. My guess is it's a species of Sphaerium. 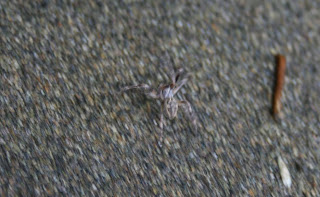 Then, miracle of miracles. Life! An out-of-focus spider ran from behind a rip-rap. This is not a blurry photo. The spider actually looked like that. This reminded me that rock-flipping is best done in pairs if photography is to be involved. One flips, the other clicks. Especially when the rocks are muddy. 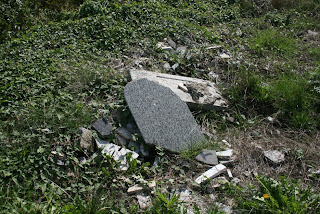 I abandoned the river and crossed the road that parallels it into a field where unscrupulous individuals dump their rubble. Were this southern Ontario, where I first learned the art of rock-flipping, I would have been thinking snakes. But since this is here, I was just hoping to find something. 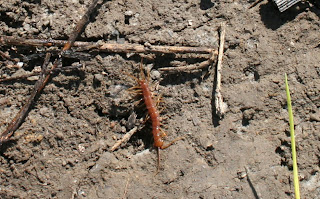 Under the thing above that looks like a tombstone I found nothing of interest, but beneath the slab next to it was Mr. Speedy, a lithobiomorph (I think) centipede. Lithobiomorph--there's a term (=rock-life-form!). Perfect for today. 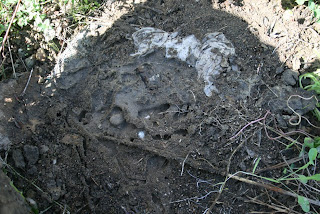 Under another faux-rock (a cinderblock) I found a colony of small black ants that had created smooth, winding tunnels. And then I had to leave. Next year, I'll head to the bay. Goal: Clingfish. 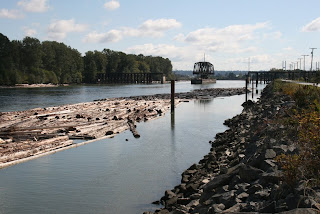 Yes, it says it all!

We flipped garden rocks and found - one earthworm, a wire worm, a snail and a whole lot of wood bugs (or rollie-pollies if you prefer). Great fun for a five year old (and his mother).
Thanks for spreading awareness about International Rock Flipping day. If it wern't for your blog I never would have heard about it (go figure).

Didn't know about this day, will try to observe it at a low tide next year if I know it's coming. I used to be squeamish about all the wriggly things that live under rocks, but am getting better with practice. Some favorites on the beach here - baby shore and hermit crabs, kelp isopods (my favorite sea bug), and teeny tiny sculpins. Glad you found a few live things!

Eskarina, glad you had a go at it. For 5-yr-olds rock-flipping is magic. I know this because I remember it.

Karen, Good work regarding your desqueamification! I hope to do an intertidal flip next year too. Isopods are great.