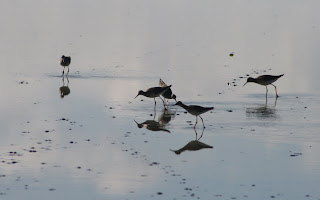 Reflected Yellowlegs
Willet and whimbrel, dunlin and curlew, sanderling, dowitcher, knot. Nonsense poem? Nope. These are the names of but a few of the dozens of species of shorebird that migrate each spring and fall along the Pacific coast.

Shorebirds are, with considerable variation in these traits, long-legged, long-billed birds that range in size from six inches to two feet. Their wings are pointed, their wing beats rapid, and their voices high-pitched and plaintive. At this time of year they fly overhead, perhaps thousands of feet overhead, mostly at night, on their way to their winter homes. Each species follows its particular path over a certain distance, representing part of a larger movement of birds along what is known as the Pacific Flyway, a lengthy migration route that stretches from the high arctic to southern South America. Some shorebirds follow rocky coasts, others touch down on mudflats, river edges or even sodden farmland. Their flying abilities are astonishing. We know from bird banding results that individuals not much larger than sparrows have flown three thousand miles in forty-eight hours.

The shorebird year is a frenetic thing. Many breed in the high arctic, arriving in early summer. They make use of the long hours of light to gather the ubiquitous insect life to feed their young. The young, unlike those of familiar birds such as robins or swallows, are up and about and foraging almost immediately, long-legged tennis balls with large appetites. They are cared for by their parents for only a few weeks. Once maternal duties are done, adult female shorebirds take wing and head south. By this time it is only mid-summer. Males follow a week or two later, and last to leave are the young of the year, at four months old expected to fly hundreds or thousands of miles to a place they have never known. But they do. 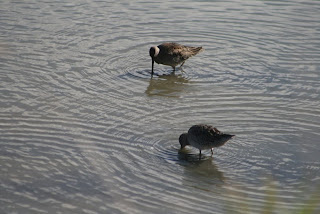 Dowitchers generating ripples.
Migrating shorebirds stop at several staging areas, places to gather and refuel. One of the most important is the Fraser River Estuary and nearby Boundary Bay. One doesn’t have to travel far to see them in great numbers, although a bit of research and luck may be involved in doing so. They are tuned to the tides and to specific habitat features that may require a bit of a muddy hike beyond the nearest parking spot. They should be looked for as high tide recedes, in places such as Mud Bay, Beach Grove, near the south jetty at Iona Regional Park, or at the outer lagoons at the Reifel Migratory Bird Sanctuary in Delta.

Along Richmond’s western dike you may see them in the distance as clouds of tiny birds that rise and wheel over the shoreline, seeming to turn as one, shimmering dark then light as they show their brown backs and pale undersides. Often these are Western Sandpipers, birds little more than six inches from beak to tail tip, which breed in northern Alaska or Siberia and spend the winter along the US coast and in Mexico. On a peak day, there can be hundreds of thousands of Western Sandpipers visiting the Fraser River Delta, which may represent a quarter of the entire global population of this species.

A bonus for birders: So much protein-on-the-wing draws the attention of bird-eating predators, particularly falcons such as Peregrines and Merlins. They too have pointed wings. Look, there's one now. 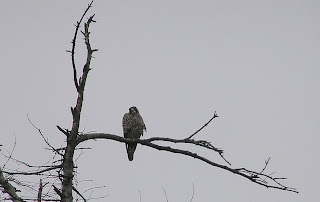 Posted by Hugh Griffith at 2:07 PM

That first photo is a real stunner.

Thanks, Dave. I think the partly obscured bird messes up the flow of it, but the shimmeriness of the reflected sky makes it nicely dreamy. I wish I'd taken more pictures to have a larger series to choose from.

Yeah, that first photo is pretty amazing all right. It's like they are walking somewhere between sky and water.

hullo Hugh - wanted to compliment you on that first photo but i see that's already been taken care of ;-)

Thanks KompoStella. Great to hear from you!