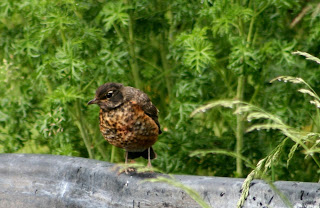 Last week I placed a hard plastic pond-liner next to the veggie patch to keep errant basketballs from smushing things. Then it rained and rained, and the pond-liner suddenly became a shallow pond that started attracting birdlife.

Today a glorious male American Goldfinch alit on the lip of the pond, and gleamed in the sun. I ran to get my camera, but realized the window was far too smudged by small fingerprints to take a useful shot. I tried surreptitiously to wipe away the smudges, but the goldfinch saw and was spooked. I guessed he would come back, so finished cleaning the window and set the camera on the table, ready for his return.

I waited and waited. Next to the table is a cupboard in which snack foods are stored. I peeked inside. Prunes! There was a package of pitted prunes with a resealable zip-top. I have not eaten prunes in recent history. They were worth a try.

The glorious male goldfinch landed again, exactly where he was supposed to. He gleamed ferociously. I reached to my camera, but froze. I dared not touch it. My fingertips were gummy with prune goo. I unsuccessfully sought a napkin.

He flew away with loping flight and burbling song.
Posted by Hugh Griffith at 7:55 PM

Thank you for the reassurance! I thought I was the only one who did this kind of thing.

Your words are affirming. I appreciated the much needed smile! ~karen

And I thought the prunes would have made you leave your post for a completely different reason :)