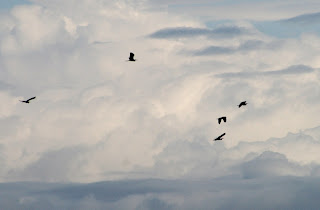 It has been a while since I posted a heron. Some time ago I stopped posting on Daily Heron, because I was no longer seeing herons on a daily basis. It was them, not me. They had departed, off to their heronries to make more of themselves, temporarily leaving me in the lurch. 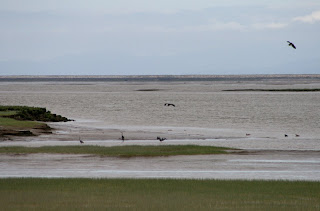 However, in certain spots they may presently be observed. Here, above, at the mouth of the Fraser River, five of the big birds were foraging, probably after fishy protein to feed their growing nestlings. The first image shows them against the sky after having been spooked by a Bald Eagle, as close to a heron flock as you'll see . The second shows them getting back to business. 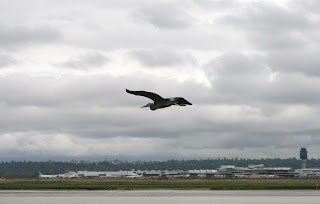 This one: a particularly large heron buzzing Vancouver International Airport.
Posted by Hugh Griffith at 1:42 PM

Your herons came up here to me! I love that last photo, he almost looks as though he belongs there, preparing for landing! ~karen

We took a ferry from Tsawwassen last week - there must have been hundreds of herons out on the mud flats! I think there is a nesting area near there, no? Anyway, I thought of your blog when I saw them. :o)