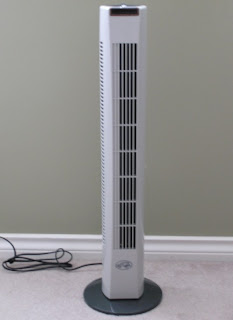 Today I did something totally amazing. I made a fan stop by looking at it. It had been running all night, and then I looked at it and it stopped. It wouldn't start again. Dead.

I had not previously realized I have this power, and vow to use it only for good.

But then there was the problem of being down a fan, with the first heatwave of the summer due to hit next Tuesday or so. I realized that I had better head to Fan World ASAP, because you know what happens on the day after the first warm night. That's right, nary a fan to be had, except from guys selling them out of the backs of vans at extortionate prices. I am not a fan of the fan van man, so on this cool and drizzly Canada Day went to Fan World and picked out the above machine, which is alleged to be a fan, although it looks more like a member of Singapore's skyline. The important thing is that it blows.

I'll try not to look at it the wrong way.
Posted by Hugh Griffith at 1:29 PM

I am not a fan of the fan van man

What? You don't like Dan? I thought everybody liked Dan.

You're not a fan van man fan?

"I had not previously realized I have this power, and vow to use it only for good."

That's what they always say.

That is a pretty cool superpower to have. You'll have to think of some situations when using it would save the world!

We have one of those Hong Kong tower fans. It works so insanely well! You will love it. Until you forget to turn off your superpower and accidentally kill it, that is.

Mr. S: We have issues with Dan Tran the van fan man.

Susannah: Don't make me angry. You wouldn't like me when I'm angry. That precious microscope.

Karen: For now I'm focusing on those spinny things on the hubcaps of Escalades.

There you go: "only for good," you said, and now you're threatening my microscope. And the carrot peeler, too; I haven't forgotten that.

I've hidden the microscopes and cameras. You can practice on the carrot peeler; I never peel carrots these days, anyhow.