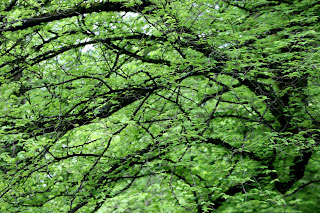 In the heart of Vancouver, on the West Side, a bulls-eye among the old-money mansions of Shaughnessy, is a strange and pleasant feature, a circular roadway known as "The Crescent," which contains an accidental (or not) arboretum.  According to Gerald B. Straley (Trees of Vancouver, UBC Press, 1992), "The Crescent in Shaughnessy is a large circle, the centre of which is planted with many old and unusual trees.  There do not seem to be any definite records of who planted the trees or when, but it is a good place to see how large some of these trees will become in 50 to 100 years." 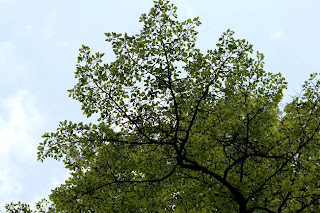 Smooth-leaved elm.
Straley also includes a map of the circle, with species-specific numbers representing the locations of the various trees.   He lists 47 species, including those from eastern North America, Asia, and Europe, some of which are multiple plantings, others one-offs. 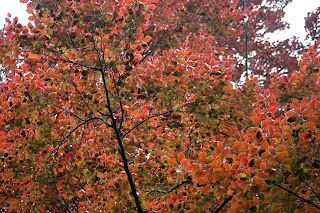 Copper beech.
I've known about this place for years, but have never visited, possibly because I don't move in old-money mansion circles, but also because it's reached by navigating through narrow, curving streets, somewhat removed from the main arteries of the city.  Today we were in a nearby part of Vancouver, and I pulled a map out of the glove-box.  I said, "Let's find The Crescent."  And so we did. 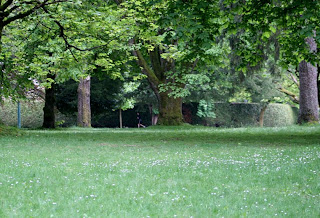 Between the noisy thoroughfares of Granville and Oak, it is a quiet oasis, the sound of wind through the leaves only slightly louder than the footfalls of joggers, who naturally gravitate to circular trails. 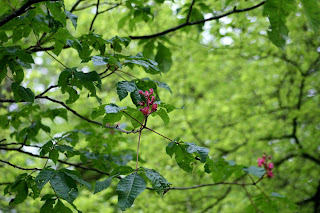 Red horse-chestnut.
I walked around, trying to match the numbers on the map in the book, which are scattered like letters in a bowl of alphabet soup, with the trees.  I went off-track several times. It's not a big place, but because of its circularity is difficult to investigate systematically.  I identified only about half of the species, aware that those with me were not particularly keen on tree taxonomy.  I'll return in the summer, spend an hour or two. 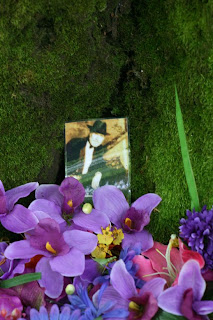 I came across a small memorial at the base of a spreading elm near the centre of the circle--a quiet place for reflection in the middle of a circle, in the middle of a city.  I thought the picture might be of Long John Baldry, a Vancouver resident who died a few years ago, but I don't think so now, after an image search. 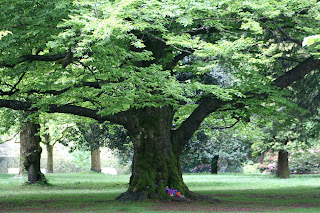 A quiet place, among, and because of, trees.
Update, June 1: A very inventive and entertaining Festival of the Trees (#60!) is now up at Rubies in Crystal the blog of Brenda Clews.
Posted by Hugh Griffith at 6:11 PM

Email ThisBlogThis!Share to TwitterShare to FacebookShare to Pinterest
Labels: festival of the trees, urban forest, Vancouver

Very nice. There's nothing like great old trees. I was so happy that was the first thing my daughter wanted to plant when she bought a house last summer.

Thanks, and you obviously did a great job raising your daughter. Good for her!

hi hugh... came via festival of trees.... lovely to see these beauties in the city... that last shot of the elm is gorgeous. I've not seen an old elm since they were ravaged by dutch elm disease years ago in the uk. lovely.

Hi Suzi, There are a lot of European elms in Vancouver, used as street trees. The American elms in eastern North America were also decimated by Dutch Elm. I remember the huge stumps.