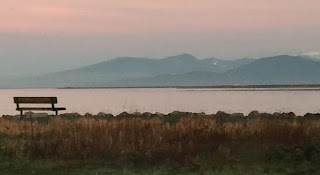 Two years ago we went to a large wedding at the Hotel Vancouver. It was in a banquet hall on the second floor, and without thinking we piled into an elevator on the ground floor at the same time as three other groups. We were all stuffed in there, shoulder to shoulder, arms down, doors closed, and an alarm went off. The elevator was overloaded and wouldn’t move. The minutes it took for the doors to be wrenched open are seared into my mind. Sometimes I relive them during insomnia, and have to leap from bed and walk around the house, swinging my arms.

The train started moving.  Then stopped.

It started again.  Then it stopped again.

Slowly, slowly, slowly it got to King Edward Station. There was an eruption onto the platform, people breathing deeply, swinging their arms. My daughter and I ran up the stairs onto the street and down the block to Queen Elizabeth Park. We sat on the grass and I phoned my wife, who was driving home from work. I asked if she could pick us up. It would take 45 minutes. That was not a problem.

Yesterday at the grocery store it was busy. Several people were careless about the 2-meter rule. Two meters is my diameter when I'm swinging my arms.

Posted by Hugh Griffith at 9:13 PM